Thanks For the Many Hours of Free Entertainment, But From Now On, I’ll Be Without Lost

There’s a famous scene in The Simpsons, the Poochie episode, where the comic book guy explains how he expressed his displeasure regarding a substandard episode of Itchy and Scratchy. “Rest assured,” he says to Bart, “that I was on the Internet within minutes, registering my disgust throughout the world.” They continue arguing (dialogue courtesy of snpp.com):

Bart: Hey, I know it wasn’t great, but what right do you have to complain?
CBG: As a loyal viewer, I feel they owe me.
Bart: What? They're giving you thousands of hours of entertainment for free. What could they possibly owe you? If anything, you owe them.

I agree with Bart, and in that spirit I’d like to thank Lost for the first 13 episodes of Season One. I am not planning on watching any more Lost, but the first 13 were, for the most part, compelling and enjoyable. The reveal regarding John Locke’s “condition” was one of the few times I was genuinely surprised by a TV show. It wasn’t a cheap reveal either – the evidence was there, but masterfully hidden, so that you didn’t feel ripped off, or, worse, able to solve the riddle instantly (which I find often happens with even the best shows on television).

In the meantime, hang in there, people of Lost. Your fate will be determined in 2010.
Posted by Ryan Bigge at 9:40 PM

Oh … The Line of Beauty

My summary of The Line of Beauty, by Allan Hollinghurst:

As I neared the end of the novel, and as I watched Nick say “Oh … ” for the one-thousandth time, I finally grew weary. The meticulously annotated conversations, the microscopic level of descriptive detail, the suffocating presence of irony, ironies and ironic facial expressions and situations finally wore thin. That said, the first two-thirds of the novel are fantastic. If the gay sex in The Emperor’s Children wasn’t explicit enough for you, then The Line of Beauty is the book for you.
Posted by Ryan Bigge at 11:53 AM

It's obviously an error, but I couldn't resist screen grabbing from the Star recently, where the new Air Canada fuel surcharge was filed under the category of "GTA/CRIME." Sounds about right to me.
Posted by Ryan Bigge at 12:53 PM

Really? That's the best you could come up with? That is intellectual soft serve.
Posted by Ryan Bigge at 9:16 AM

I'm a Mite Confused -- Is This My Last Issue? 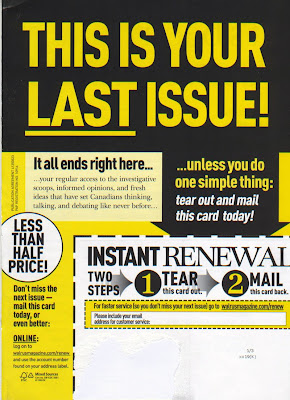 This notice covered my copy of the Walrus that arrived in my mail slot recently. This prompted my girlfriend to joke, "I'm confused -- is that your last issue?"

You can smell the raw panic and desperation, can't you?

Anyway, I checked the mail this morning and, believe it or not, there was a new issue of the Walrus. Like a girl with low self-esteem, whose ultimatum regarding the relationship has gone unheeded by her insensitive boyfriend, she is still putting out.

For the record, I do not plan to resubscribe.
Posted by Ryan Bigge at 11:29 AM