Fancy Videogame Party at the AGO was one of the best events I’ve attended in quite awhile. And I’m by no means a video game fanatic. My only regret is ignoring the word “Fancy.” I have a decent suit jacket from Zara I could have worn on Friday. Instead I wandered around like a schmuck in a sweater and jeans. I promise to stop skim-reading event descriptions from now on. 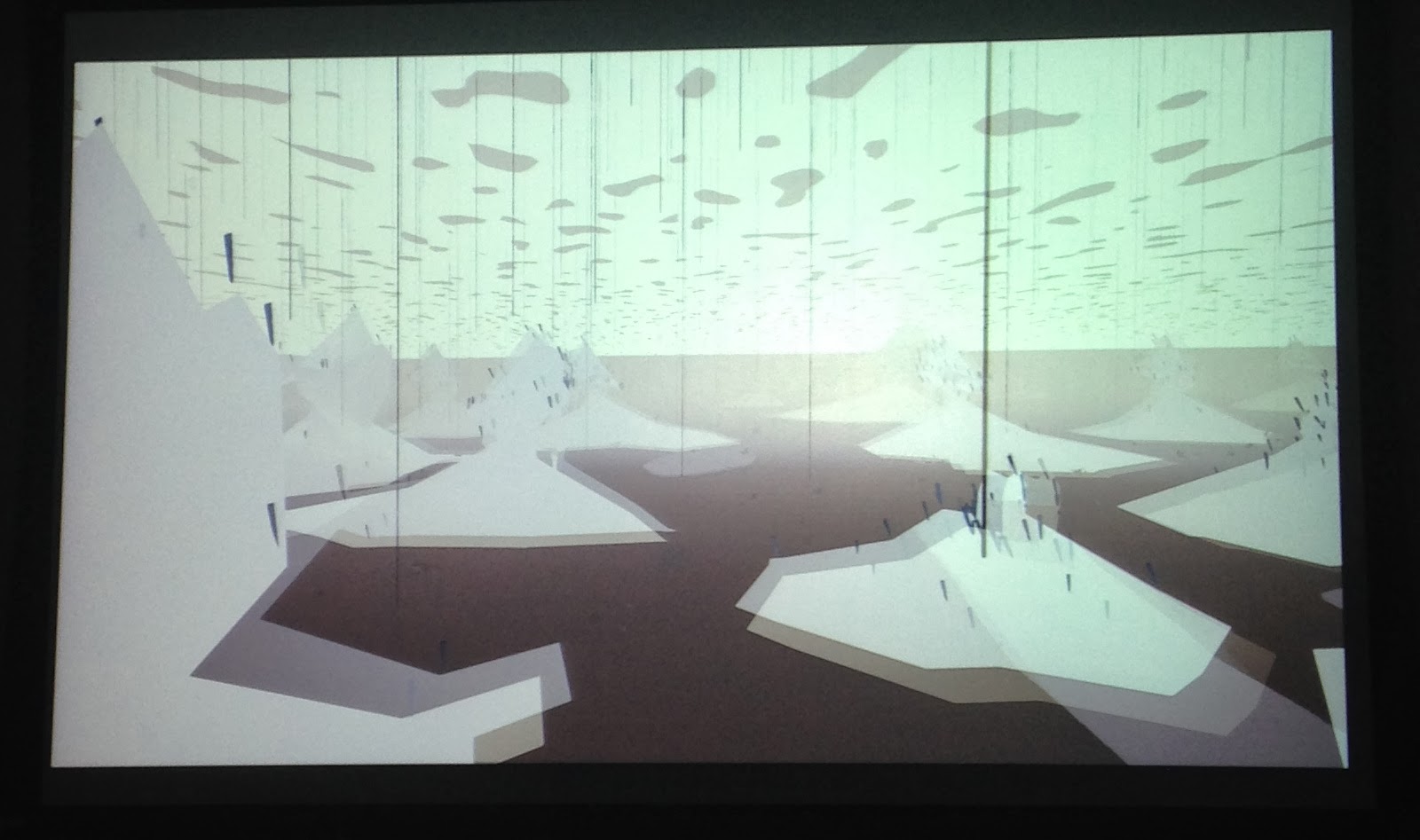 I would have been happy to “play” Panoramical all evening. It’s less game and more interactive art exhibit. I now dream of installing a permanent version of it in my living room.

I didn’t play The YAWHG but it was beautiful to watch and read.

Johann Sebastian Joust deserves a nod for the name alone. As a bonus, it’s a great idea, well executed.

Nidhogg offered a very smart twist on the typical “two guys try to kill each other” duel (dual) player game.

Tenya Wanya Teens was whimsical stupidity. This usually annoys me. Instead it was delightful.

My final favourite thing was not a game, but the highly effective and intelligent use of space. That might sound like a nerdish thing to say, but it was pretty crucial to the success of the evening. The Family Learning Centre spans two floors and a bunch of rooms. Instead of cramming too much into the lower floor main space, the organizers gave each game plenty of room. The arcade cabinets had their own zone upstairs. Panoramical had its own room, as did JS Joust. Nidhogg was projected on a massive screen that was visible from both upper and lower floors. The layout and thought put into display was more typical of video or interactive art exhibition.

This space planning was not a coincidence. I ran into my friend Paola Poletto at the party, who works at the AGO. She mentioned that in the original configuration, they were going to sell alcohol on the lower floor. That would have been a disaster, as the lower floor has an occupancy limit. By putting the alcohol upstairs, along with a good number of games, it ensured that people circulated throughout the evening.

Compare that with The Great Hall at Queen and Dovercourt, which also has multiple rooms. But because they’re only licensed to sell alcohol in the main room, people are forced to wait in huge lines to try and get in. (As a bonus, if you need to use the bathroom, you must exit the main room and then go back in line.) I nearly didn’t get into the main room for the Spacing launch, and ended up on the balcony during Shezeer’s set at the recent Long Winter event.

In summary: Indie video games are fun. Space planning is the final frontier.
Posted by Ryan Bigge at 11:05 AM

It's funny 'cause it's true

One day, though, when their issues seemed largely resolved and I suggested discussing an end to their therapy, the husband brought up a new concern: His wife now seemed less interested in having sex with him. He turned to her and asked why. Was she still attracted to him? After all, he wondered, why did she appear less interested now that their relationship seemed stronger in all the ways she wanted?

“I’m very attracted to you,” she said earnestly. “You know when I really crave you? It’s when you’re just back from the gym and you’re all sweaty and you take off your clothes to get in the shower and I see your muscles.”

Her husband countered by saying that this very situation had occurred that morning but that his wife became irritated when he tossed his clothes on the floor, which led to a conversation about his not vacuuming the day before, when she worked late. He had worked late, too, which accounted for the lack of vacuuming, but still — she hated waking up to a messy room, and it was his turn to vacuum.

“Right,” she agreed. “I wasn’t focused on sex, because I wanted you to get out the vacuum.”

“So if I got out the vacuum, then you’d be turned on?”

His wife thought about it for a minute. “Actually, probably not,” she said slowly, as if hearing the contradiction even as she was speaking it. “The vacuuming would have killed the weight-lifting vibe.”

From the NYT Mag