I spent a considerable chunk of time admiring Cuphead at the 2016 Hand Eye Society Ball held on September 24 at the Masonic Temple. In part because it was projected onto a movie theatre sized screen, making it hard to ignore. Also, Cuphead is basically a playable cartoon from the 1930s, making it far more visually compelling for spectators than a typical videogame.* 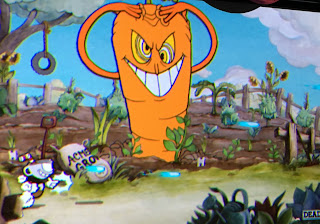 The only problem with sustained observation is that eventually you start to spot flaws.** The most obvious is that Cuphead is a run-and-gun*** bolted to a surreal, Fleischer brothers, dream world. The result is a visually inventive game powered by standard-issue game mechanics. You might fight gourds, onions and carrots, but they’re still bosses, a trope that dates back to the 1980s.

It might seem cruel to critique an independent game maker, especially since I’ve seen the risk and struggle involved in DIY via Indie Game: The Movie. But I found the cartoon aesthetics without cartoon illogic to be constraining and unsatisfying.

Pico Park, meanwhile, will never be described as beautiful. But it only took two minutes with this 10-player, cooperative game before my dear friends Surprise & Delight appeared. The right amount of unpredictability and spontaneous problem-solving, coupled with group communication and strategizing, made this my favourite game.

Finally, I would be remiss if I didn’t mention that I attended Society Ball last year, which featured multiple lineup snafus. (To their credit, Hand Eye apologized rapidly and thoroughly.) This year the organizers worked so hard not to repeat mistakes that it felt like a bizarro-world parody of 2015. During my time at the Society Ball, there were no lines of any kind (bar, bathroom, tickets, coat check). Yes, lineups to play the games, but that’s to be expected.

-- -- -- -- -- -- -- --
*Approximately 90 seconds after writing this sentence I realized there’s a cottage-industry built around people watching gamers do their thing.

***This is not a hot take: the creators describe Cuphead as “A RUN & GUN GAME FROM STUDIO MDHR.”
Posted by Ryan Bigge at 9:19 AM

Do not sell to Kandy Kat. Dangerous character.

I never quite found my way into Alexandra Kleeman’s novel You Too Can Have a Body Like Mine. But I did eagerly read every last word about Kandy Kat and his Kandy Kake obsession. Here are all the tasty bits in one convenient location:


In this new series, Kandy Kat would often successfully chase down or otherwise achieve contact with the snack cakes, but the cakes were pictured as live-action, three-dimensional objects while the cat was always a flat cartoon. The gag each time was that no matter how hard he tried, Kandy Kat could never put a Kandy Kake down his throat: the two types of matter were fundamentally incompatible.

Kandy Kakes were made of Real Stuff.

In this commercial, Kandy Kat faces off against his longtime nemesis Kandy Klown, a bulbous, Santa-shaped figure who consumes Kandy Kakes like it’s the simplest thing in the world, like it’s all he can do.

The slogan to that Kandy Kakes advertisement was off somehow. We know who you really are. It failed to sell anything, it wasn’t friendly, it sounded more like a threat than a promise. But then again, maybe it was a promise made to the worthy, that they alone would have all the Kandy Kakes they desired.

On-screen there was another Kandy Kakes commercial. In this one, Kandy Kat has become a scientist so that he can crack the problem of Kandy Kakes, find out what makes their matter so disastrously incompatible with his own. Kandy Kat guides us through a series of diagrams on the chalkboard that elucidate the basic structure of a Kandy Kake: outer coating of crispy candy shell sprinkled with crushed nuts and a patented candy substance known only as “Choco Shrapnel,” then a layer of gooey caramel followed by two layers of rich chocolate of slightly different consistencies.

At the center is the top-secret “Kandy Kore,” a dense, sugary substance whose chemical composition is known to only a few privileged individuals within the Kandy Kakes empire.

When Kandy Kat appears on two televisions screens at once, does he split in two? Two bodies with two minds pointed out at identical cartoon scenes? Two bodies responding identically, like twin machines? Or is there still one cartoon body, ribby and drained, with a doubled hunger for its double image?
***

Like in the commercial where an impish young Kandy Kake lures Kandy Kat on a chase through frame after frame of a happy suburban neighbourhood populated by cute yellow houses.

Then a stray claw snags on a piece of sky, and the world starts to stretch and then  slump in a startling way: Kandy Kat has literally torn through the scenery, caused a widening rip in the world. He stops to look, perplexed, at the fluttering material, blown by a breeze of unknown origin.

The shot widens, and we see that Kandy Kat is standing in a studio soundstage in front of a flat, painted background that slips past him while the little Kake turns a crank. One yellow house after another scrolls by before Kandy Kat looks down and realizes that he’s been running on a treadmill the whole time, a treadmill that yanks him suddenly backward and threatens to throw him off completely.

Maybe Kandy Kat survived like that, from images of eating and images of food. Light consuming light, the desire for sustenance a type of sustenance in itself. Even if he was always paused on the narrow edge of starvation, what he was doing in pursuit of Kandy Kakes sustained him. They made his life terrible, but at the same time they made him more himself.

It was just like that commercial where Kandy Kat turns to crime in a last-ditch attempt to achieve Kandy Kakes consumption. He goes from store to store trying to buy a single, measly package of Kandy Kakes, but nobody will sell him anything. They point at a poster behind the counter that reads DO NOT SELL TO THIS KAT. DANGEROUS CHARACTER. Kandy Kat’s face is on this poster, hollow and gaunt. So Kandy Kat hijacks a freight train made up of an endless number of cars painted with the Kandy Kakes logo, and off goes the Kandy Kakes alarm, ringing police helicopters and squad cars, then military tanks. As Kandy Kat barrels toward a military blockade, he reaches back for a box of Kakes and says a final prayer before opening the box. But the box is empty, and so are all the others in the first car, and the second, and Kandy Kat looks up toward the impending collision with tears wobbling in his eyes. Strings of drool hang from his mouth as he meets his doom.

In one Kandy Kakes commercial, Kandy Kat and a Kandy Kake are dropped into the right and left halves of a split screen. Time begins speeding up as they stand side by side: seasons change and the furniture starts looking more futuristic, hands on the clocks in the background spin around dizzily. Kandy Kat’s bony body grows longer and taller and wider as it ages, though never more fleshed. Then suddenly he buckles, beginning a serene crumple inward. His knees bend and begin shaking, his head hollows out and gets skully, sinking down toward the ground where the shedding hair collects in soft, fluffy clots that blow around like tumbleweeds. His shriveled tail looks like a chewed-up rope. Occasionally he raises a skeletal paw to the stark black line that divides him from the Kandy Kake one cell over and claws at it, but he’s clearly getting tired. On the other side of the split screen, the Kandy Kake is doing jumping jacks and calisthenics, practicing the cancan, hopping around, and looking bored. No matter how much time seems to pass, it remains the same: untouchable, impassive.

As long as you leave the water-repellent fudge casing intact, your Kandy Kake is guaranteed to stay fresh for twenty to thirty years. By this time, Kandy Kat is mostly a pile of hunched bone and hide, his two round eyes blinking blearily at the audience. He holds up a sign that reads MY LAST WORDS, while the Kandy Kake, which has found its way over into his half of the screen, dances a perverse jig around his broken body.
Posted by Ryan Bigge at 10:30 PM