When Amanda Cohen and Noah Segal received multiple offers on their semi-detached downtown Toronto home Sunday, one stood out. Along with a written bid, the potential buyers included a video presentation with a unique message.

"They showed their baby 'signing' the offer and told us how much they loved our place," says Cohen. "I thought it was brilliant. We were really moved."

Chocolates. Maple Leafs tickets. Handwritten notes and personalized videos. Bidding wars for Toronto real estate are once again percolating, with desperate buyers trying to make an impression however they can. The phenomenon, say real estate insiders, speaks volumes about the city's housing market.

"People are now making audition tapes begging you to let them buy your house, and by the way, they'd also like to give you more money than you asked for. How outrageous is that?" says Bernard Lang, a Toronto investor in rental properties.

Depressingly Honest Letter From the Editor 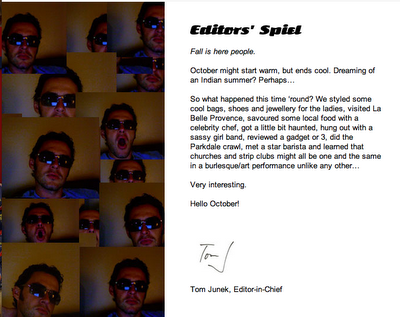 I thought the recession was supposed to eliminate the need for such awful self-parody. Apparently not. The only thing edgy about this magazine is a potential paper cut from it.

It's less the costume itself than the frat guy giving the thumbs up while the more refined woman tries to retain some measure of dignity. The male-female dynamic, in microcosm. 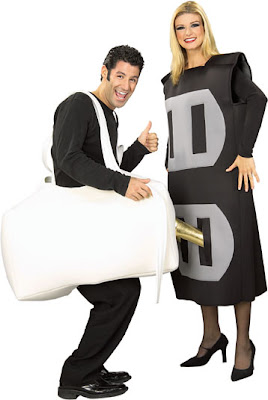 Bored To Death of Bourbon

I blogged a little while ago about how Blanton's appeared in the pilot of Bored to Death, albeit very subtly. I wondered if it was product placement or not.

Well it was, as episode four proved: 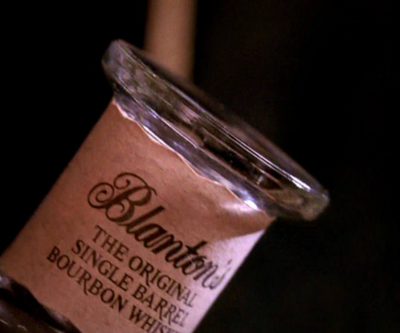 I still haven't decided how I feel about this, given that I like said bourbon but dislike product placement.
Posted by Ryan Bigge at 12:07 PM

This is painful to write, because we go way back, and I used to like you a lot. My wife and I used to visit you, at your old location, fairly often. When you moved west on Dundas, and opened a beautiful new restaurant, we were really impressed with both the décor and the food. It’s hard to find good vegetarian food in Toronto, and you were doing it exceedingly well.

I’ll admit we didn’t visit you as often as we should have – a few times a year. But we brought friends sometimes, and mentioned it favourably to a number of people.

I thought we had something special between us, co-owner Hon Quach. You used to be so nice to us at the old location. And I acknowledge you were either busy or short-staffed on Saturday night (October 10, 2009) when the four of us arrived. Things started okay -- you took our order quickly, and brought us our wine, and everything was good. The soup was wonderful.

And then the first dish arrived, and it wasn’t what we had ordered. We wanted the Singapore Curry Vermicelli (#55). I know the number, because I ordered for the table, and I said the number of the dish, along with its description. What we got, as it turned out, was #65 (Vegetarian Curry).

Now, maybe you misheard me or I didn’t enunciate quite enough. But when I called you back to the table, and asked about the dish you’d just given us, you insisted, in an incredibly rude and curt manner, that it was what we had ordered. And then you refused to take the dish away.

I had to get up from the table, walk to the rear of the restaurant, and talk to you a second time about the misunderstanding. I opened up a menu and tried to suggest that you had confused #55 with #65. And you were having none of it. “I remember what you ordered,” you said, and then went on to insist that the first thing I had ordered was the Vegetarian Curry. Which was not true. Finally you relented, took away #65 and soon replaced it with what we wanted.

Now, I don’t believe the customer is always right, but instead of being a jerk, you could have at least entertained the possibility that there had been some kind of mix up. Because here’s the thing – rectifying the error in a pleasant manner costs you four bucks in ingredients, tops.

Instead, because you were such a jackass about the situation, I’m never going to eat at Café 668 again. (We will redirect our vegetarian money to King's Cafe instead.) The two friends we brought with us, who are vegetarian and live nearby and are new to Toronto, might also never eat at your restaurant again. That’s a few hundred dollars a year, down the drain.

Here’s a final tip – literally. Being nice about the mix-up would have resulted in us leaving a 15 percent tip, instead of the 3 percent you received Saturday night. I can’t imagine being rude to us was worth it. Literally.

Another N minus One Cheapshot

N plus one is to thinking as a Renaissance Festival is to warfare.

But What Do You Really Think? (Or, N minus One)

Let me slow down here and make this point clearly, because people have a terrible habit, especially in New York, of refusing to believe this sort of thing and throwing around all kinds of silly chaff–accusations of bad faith and pandering and whatnot–to avoid it: I disliked the piece.

On its merits, I disliked it. I know very little about you as a person, and I know even less about Mark Greif. There were words, arranged into an essay. I disliked the way the words were arranged and thought that the ideas they expressed were not well considered. It seemed to me that the author was assuming a stance of moral, political, and intellectual superiority that he had not, based on the contents of the piece, earned. In fact, it seemed to me that the morals, politics, and ideas expressed in the piece were bad.

In other diversity news, Leno’s and the rest of the nighttime comedy shows are bizarrely lacking in women writers. Did a bomb go off and kill all the women comedy writers and leave the men standing? The other night on the Emmy Awards broadcast, the names of the nominees for best writing on a comedy or variety series were read, and, out of eighty-one people, only seven were women. Leno has no women writers on his show. Neither does David Letterman, and neither does Conan O’Brien. Come on.

-- Nancy Franklin in the New Yorker