A few things to ponder before watching They Live

I read Jonathan Lethem’s monograph on They Live last night in order to prep for a screening of said film at the Revue Cinema on May 29. Here are my favourite bits of insight and observation:

- “One of They Live’s eccentricities is that we know Nada’s name only because of the end credits. No one speaks it in the course of the film. Yet his name is hardly incidental – Nada’s name, with its implication that he’s something of a zero, or null-set, turns out to come directly from the Ray Nelson short story ‘Eight O’clock,’ They Live’s primary source.

- “The discourse of commerce is a kind of quicker-picker-upper, superabsorbent of what happens along, even (or especially) that which presents itself as oppositional to, or critical of, commercial culture. So, much of Barbara Kruger’s and Holzer’s impact was gently naturalized within advertising language. This awkward fact cuts against They Live’s central assertion: that the distance between the ‘lies’ of commercial-ideological speech and the coercive ‘truths’ smuggled inside it is an extreme one, and shattering to cross. Really, the two coexist and even mate with appalling ease … Kruger and Holzer’s non sequitur interventions briefly attained a gallant purity, but they’d always needed the gallery or museum context as a quarantine against recontamination. 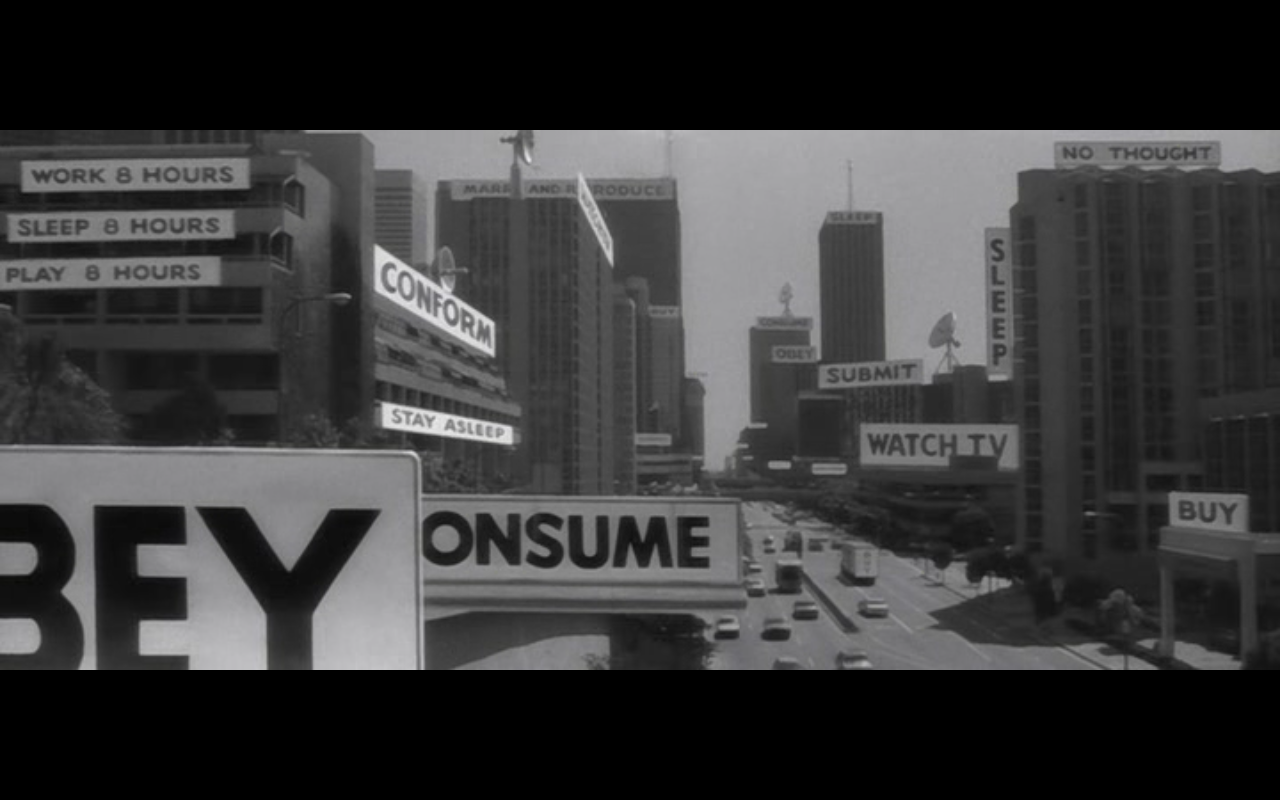 - “The film’s scenes of routine ghoul intermixing – the beauty shop, the bank, the grocery store, leading up to this pedestrian work environment – have migrated through horror, revulsion, and pointed satire to achieve a kind of drab inevitability: They Live, sure, and so do They schlep, file paperwork, get stuck on hold, and work fifty weeks for a two-week vacation.”


- “Long ago, I used to see Ray Nelson at science-fiction conventions in Berkeley. He was a droll and bright-eyed elf of a man, and known for wearing a propeller beanie, regarded as a high talisman of fannish identification, the equivalent of an IT’S A BLACK THING, YOU WOULDN’T UNDERSTAND T-shirt. I felt in awe of Nelson’s lingering traces of involvement with Philip K. Dick, my personal hero, and he, Nelson, always struck me as a figure of absurd dignity, brandishing his two or three secret accomplishments through an otherwise invisible life – in Berkeley in the 1980s, he didn’t even rate as eccentric, he was apparently too mild. I was terrified of becoming this man.”
Posted by Ryan Bigge at 8:25 PM

How do you make an online-only store more human? Show customers some of the humans that work there

I love how this marketing approach puts a human face on an online-only store and at the same time makes a subtle and smart emotional appeal for Father's Day, instead of just offering 15% off "great ties for dad." 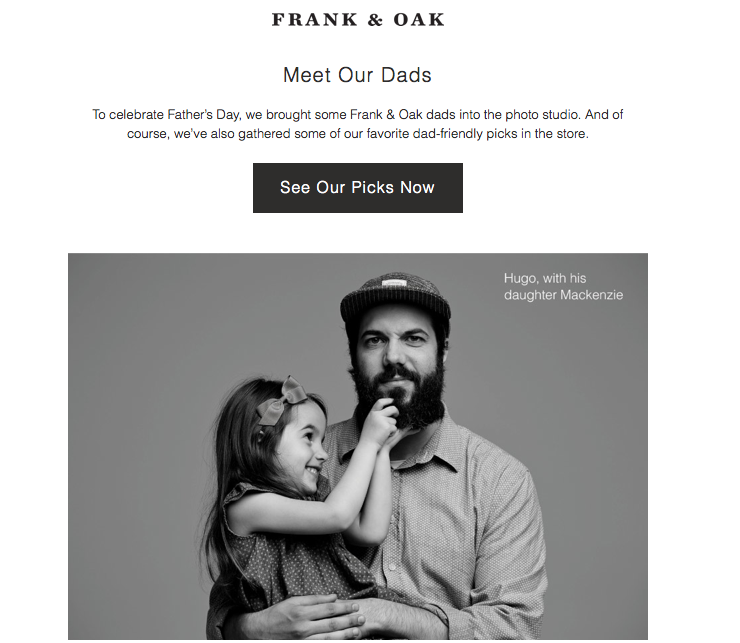 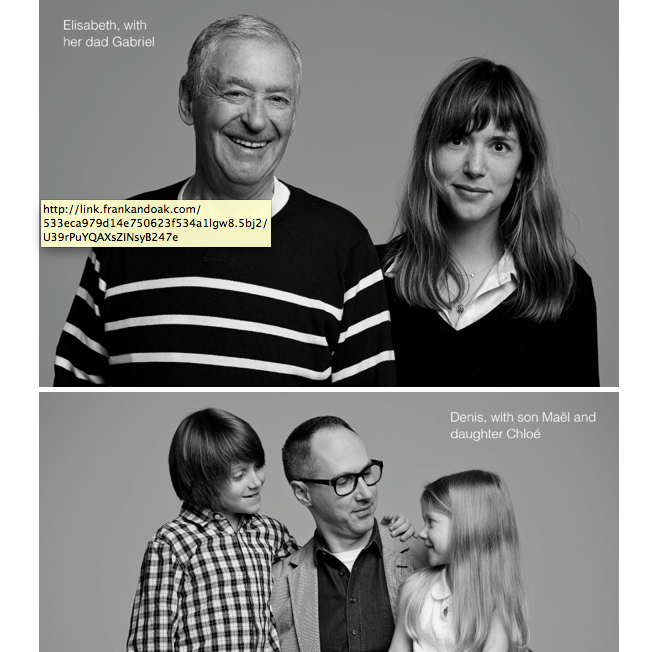 About two months ago I looked into buying a wall cabinet standing desk like this: 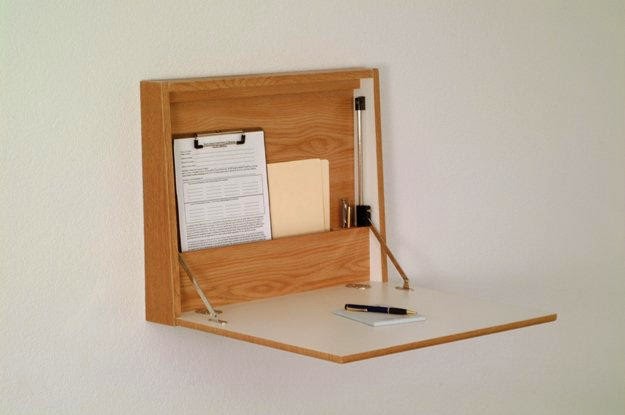 But it was only available through Amazon.com and the shipping was going to be more than the GDP of Guam. Plus it was a bit too big for what I needed.

Then I realized I could build one, thanks in large part to some blueprints I had for a wall mounted bar cabinet from an ancient copy of Readymade magazine. I had to modify the plans somewhat, but it was pretty straightforward: 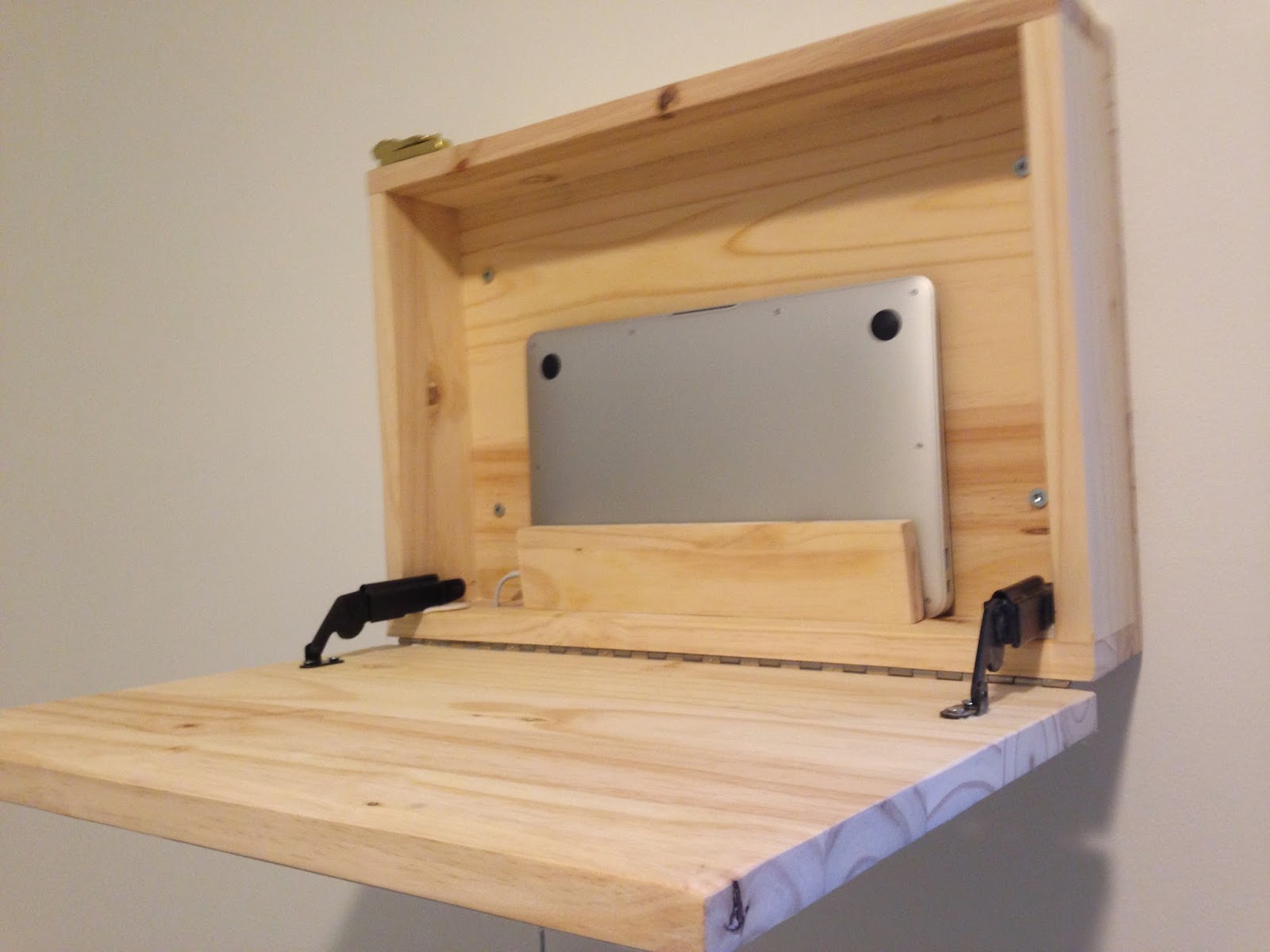 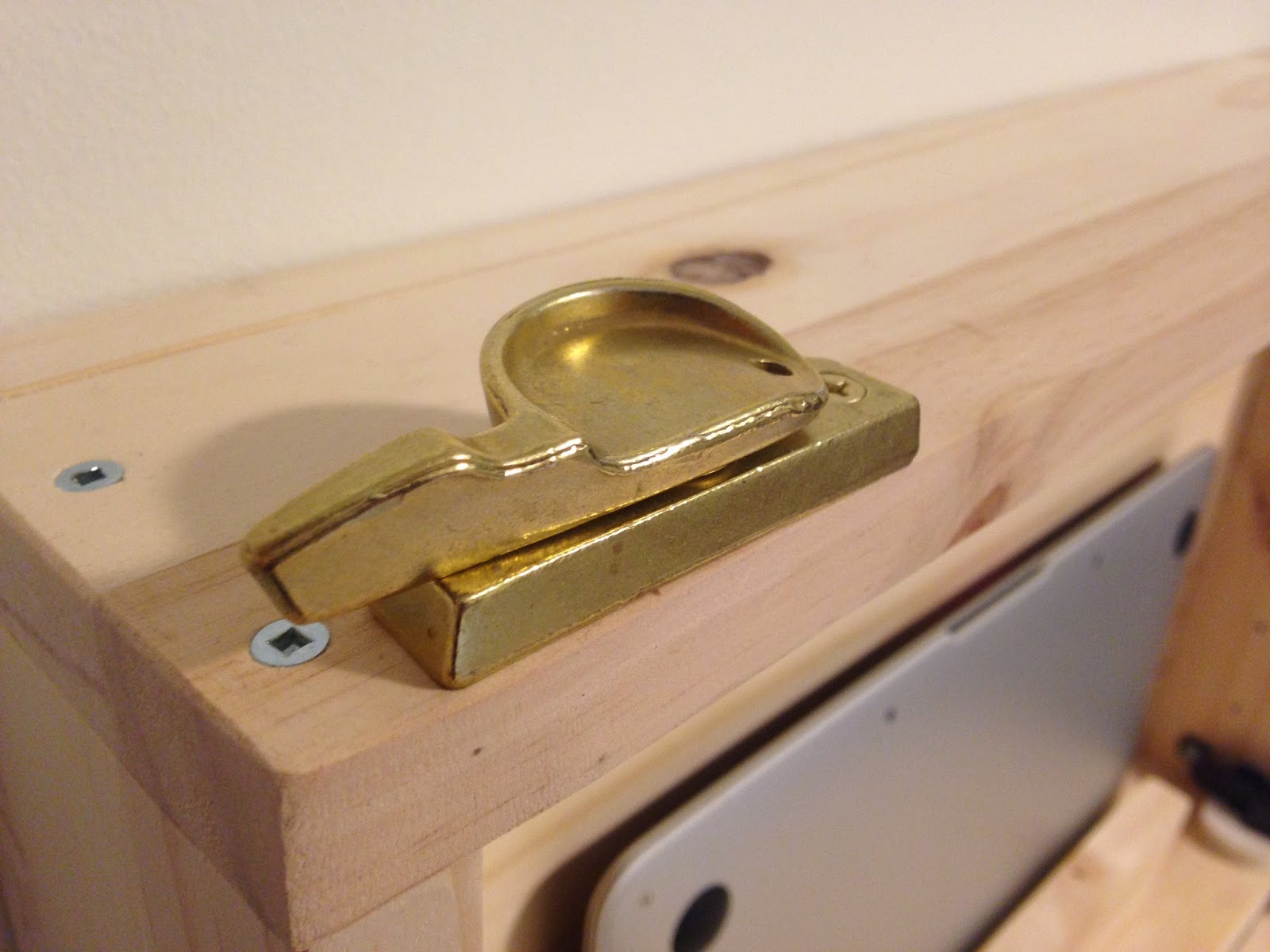 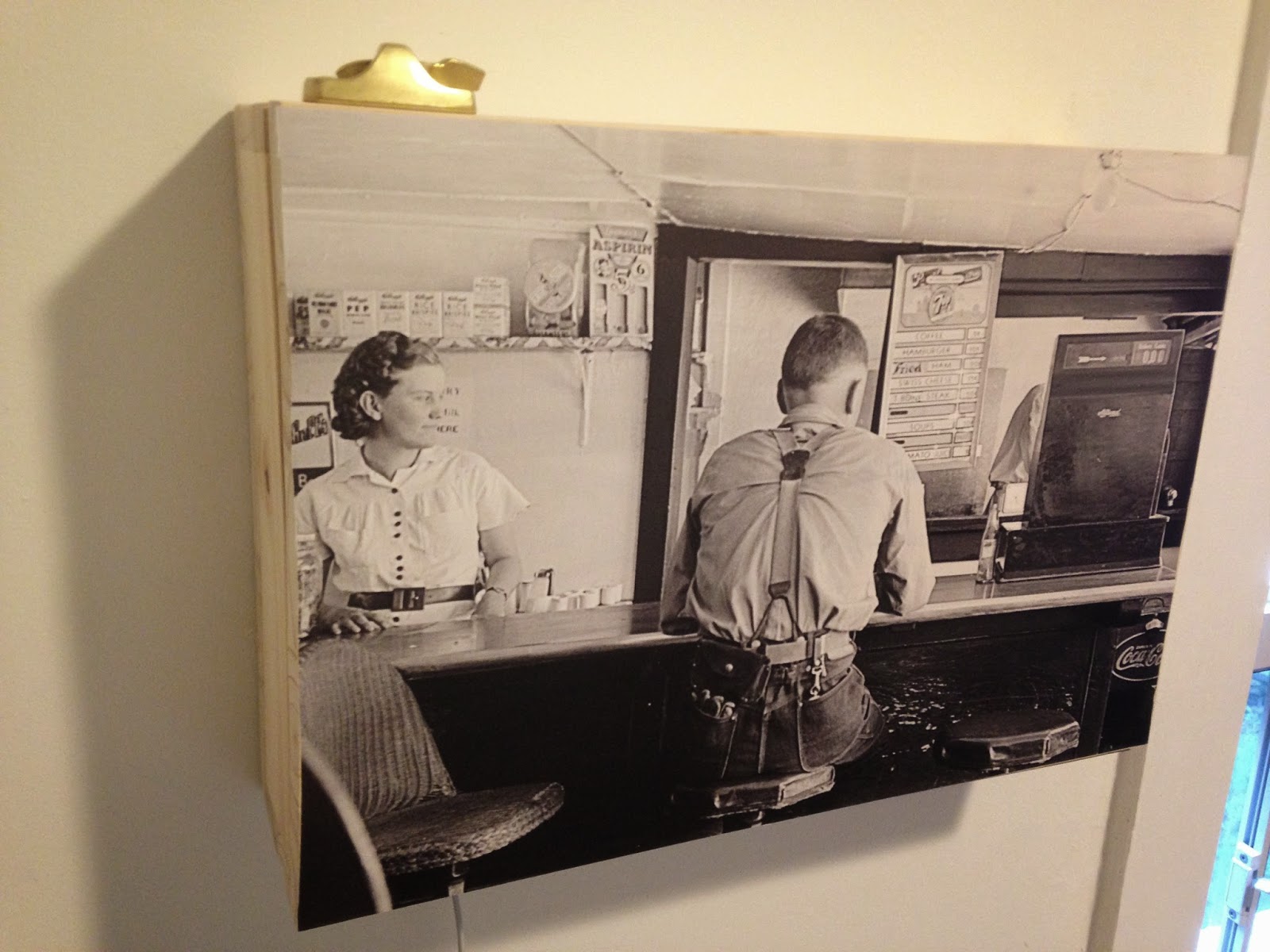 I designed the size of the work surface to match an image size offered by Posterjack for peel and stick photo posters (19 x 13 inches). I'm fairly proud of that brainwave. I was going to use magnetic clasps mounted inside the cabinet, but the hinges were too strong. Turns out I had a brand new cabinet clasp in a parts box in the basement that looks pretty darn good. 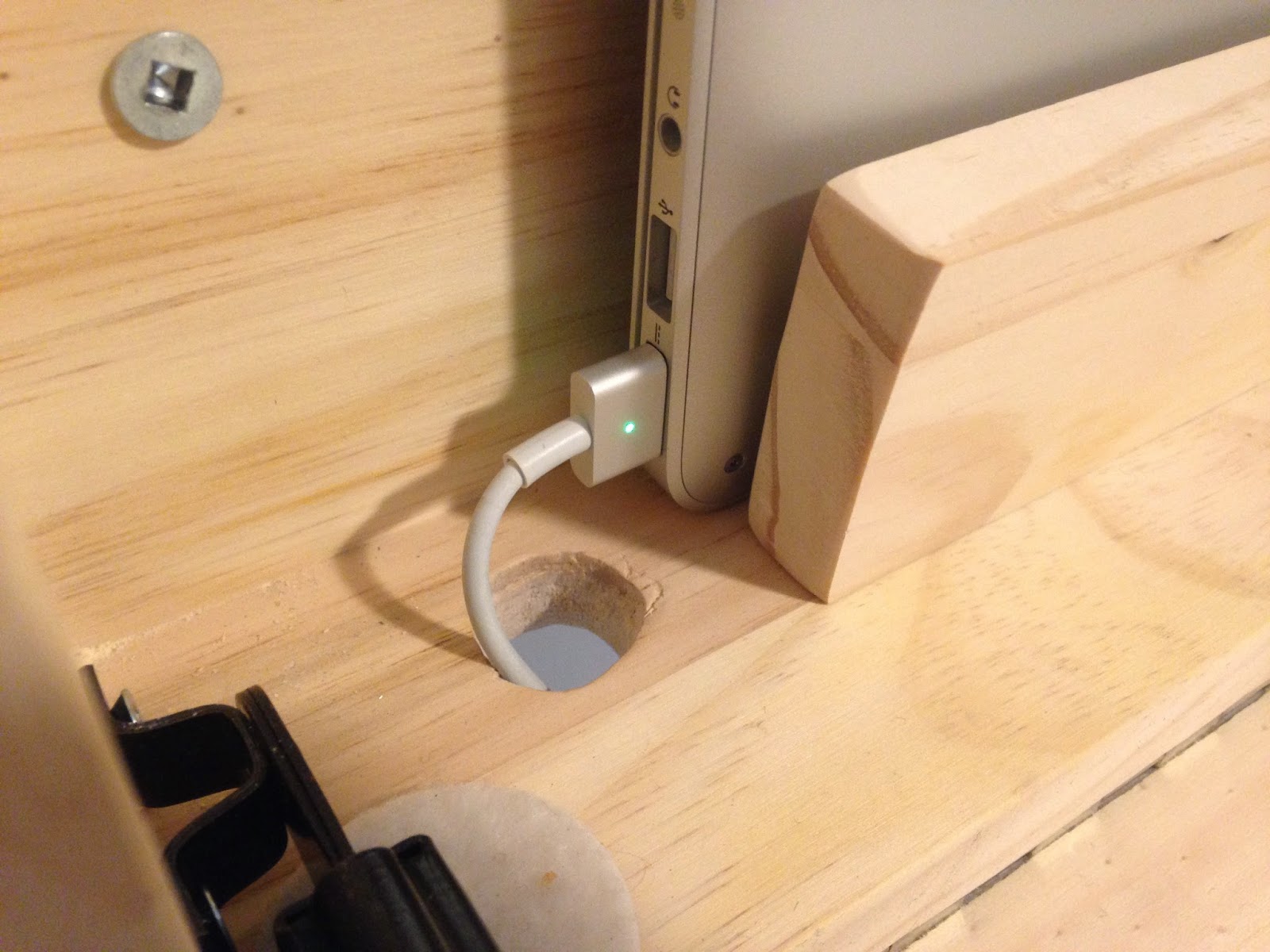 I remembered to drill a hole for the power cord. 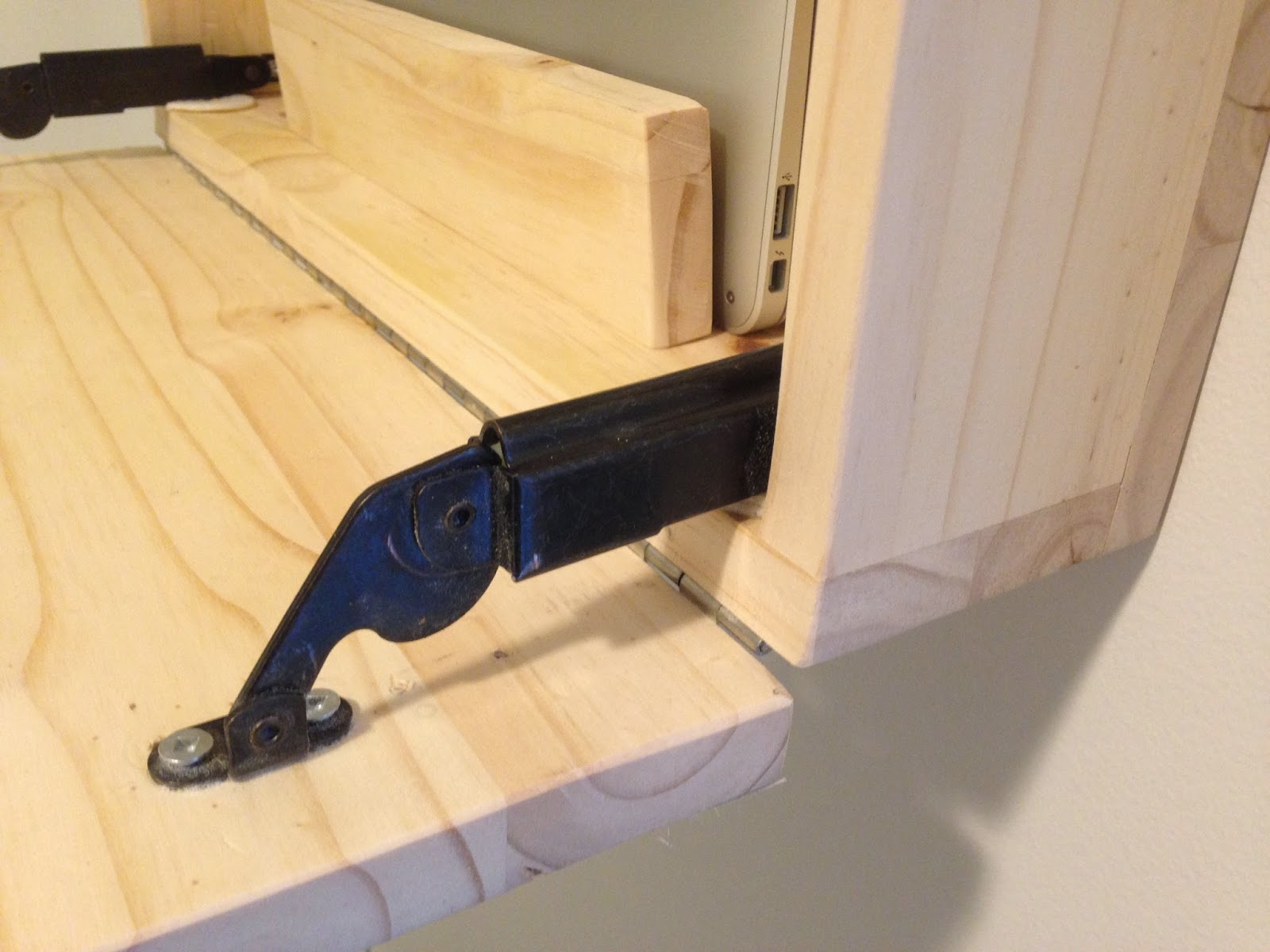 Hinges courtesy of Lee Valley. To my surprise they weren't very expensive and are rated at over 50 pounds. Also bought a very nice and very reasonably priced piano hinge that I was able to cut to size with a hacksaw. The wood itself was cheap too -- Home Depot, less than $20. 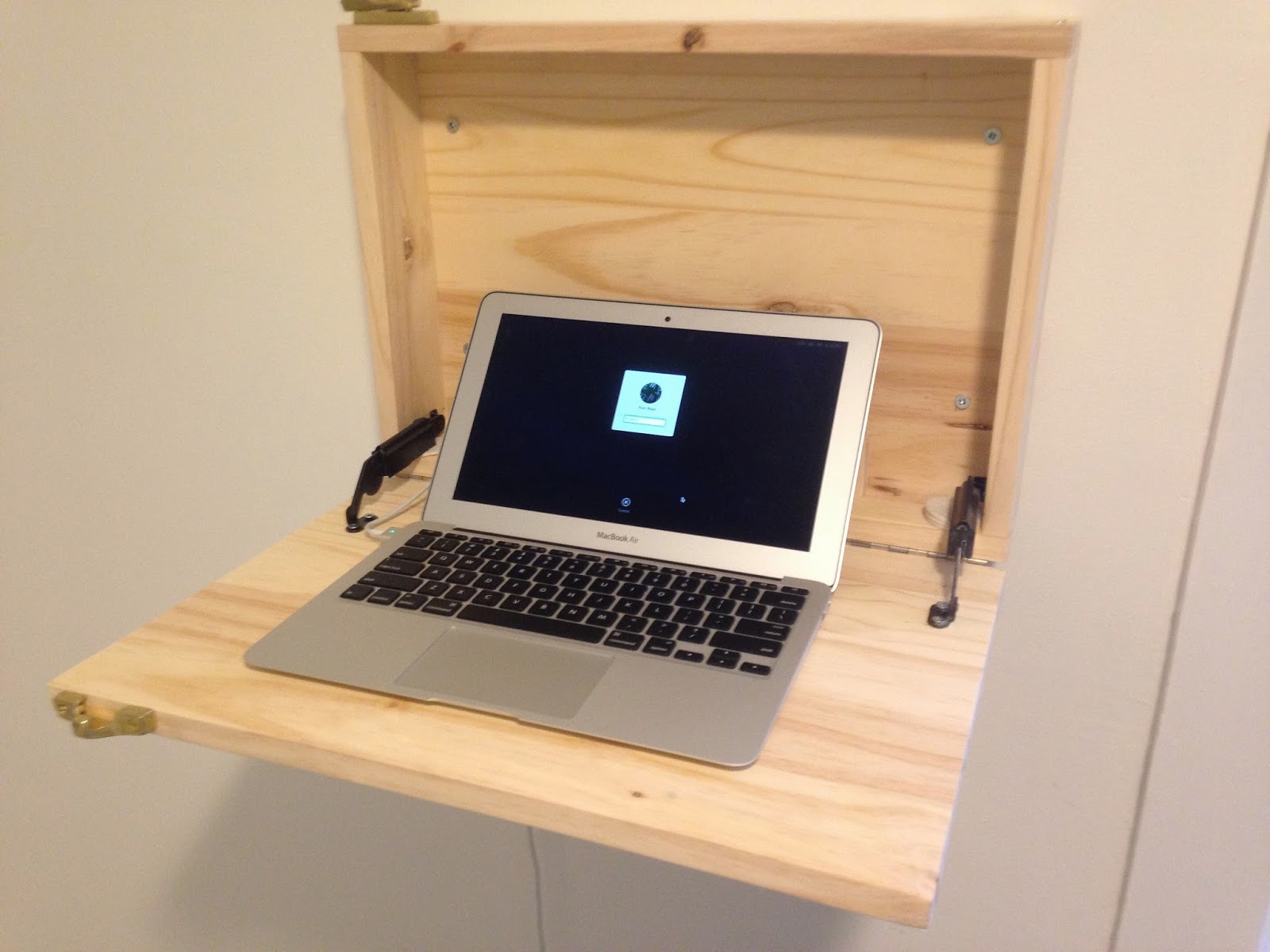 I was going to paint the exterior of the cabinet white, but decided to leave it as is. The wood is nothing fancy but looks good, and there's a nice contrast between the shiny modern laptop and the grain of wood.

Not pictured here are the dozens of mistakes, large and small, that I made along the way. Thank goodness I have 100 grit sandpaper and a palm sander. But every time I open up the cabinet, I think to myself "I made this. I made this standing desk." And that's a pretty awesome feeling. 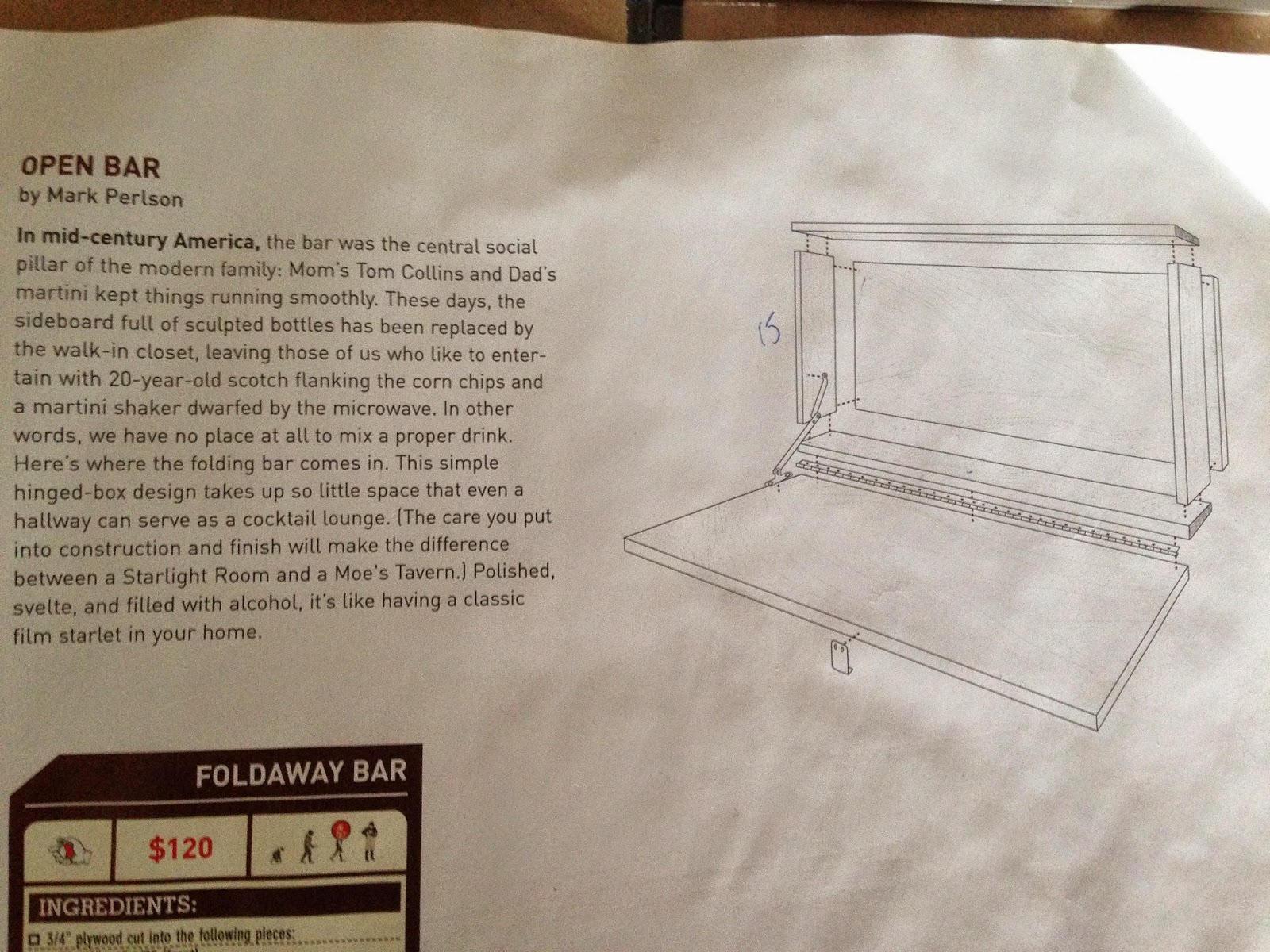 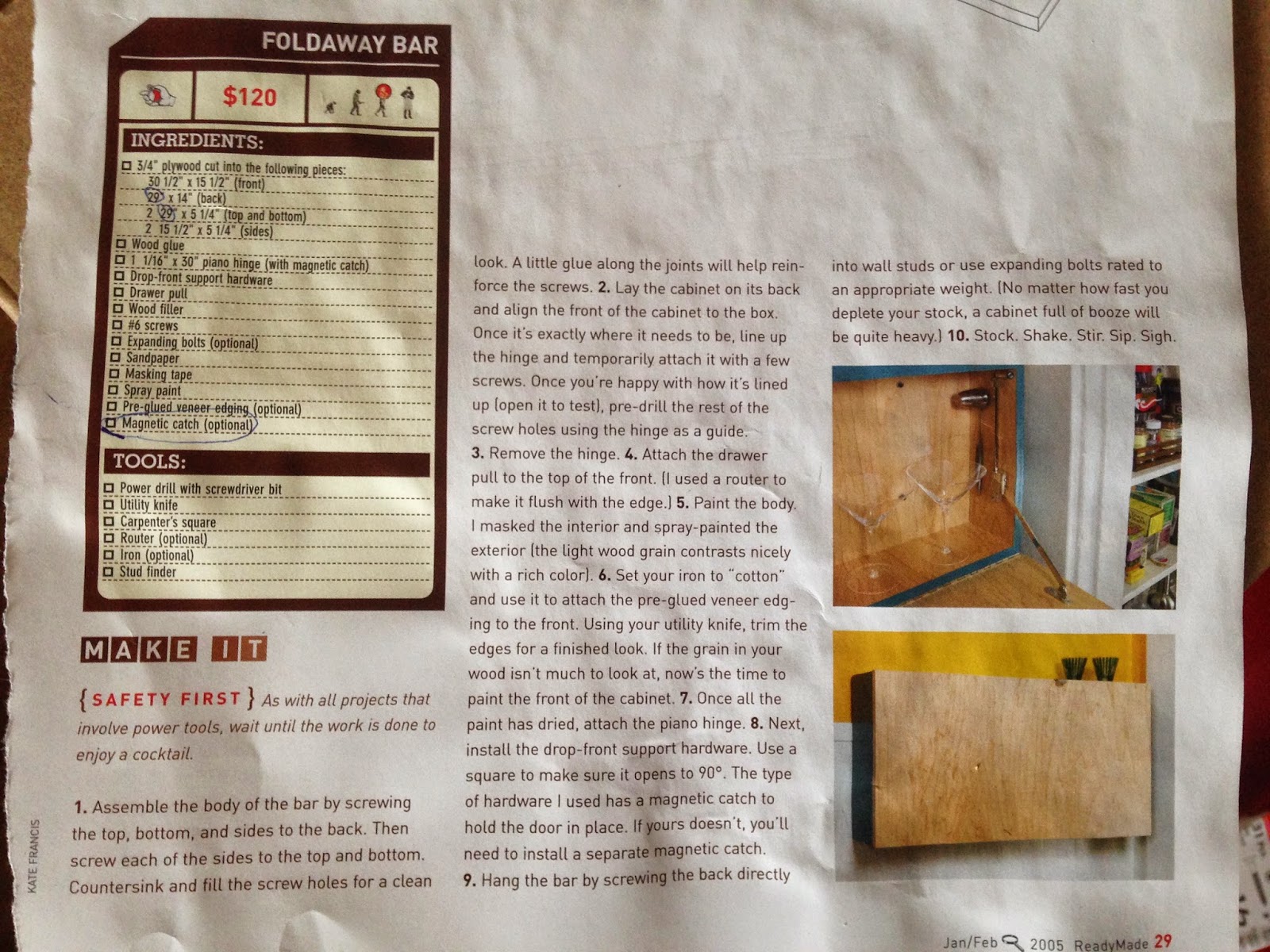 Screengrab from my Access Copyright report for this year: 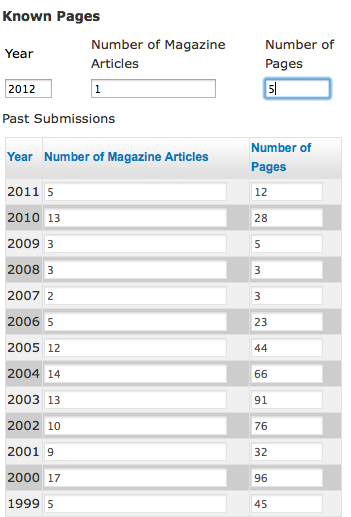