Profile of Jason Kieffer, author of The Rabble of Downtown Toronto

My walking tour of Cabbagetown, courtesy of cartoonist Jason Kieffer, begins at Jet Fuel on Parliament Street. We head west on Carleton, past Chew Chew’s Diner, where 27-year-old Kieffer often meets with fellow scribbler Dave Lapp. At Sherbourne we meander through Allan Gardens. Kieffer points out a park bench where he likes to sit and watch the sideshow of drug addicts, prostitutes and vagrants that provided the inspiration and source material for his recently self-published book, The Rabble of Downtown Toronto.

Despite spending half an hour in prime rabble territory, we fail to spot Crazy Wire Lady, Alex the Joke Teller, Retarded Crackhead or any of the other 37 people included in Kieffer’s handbook of annotated illustrations. And while a street person-free afternoon in Cabbagetown might sound like a good thing to some people, it reflects how the redevelopment of Regent Park is pushing marginalized residents out of the neighbourhood.

“Money is moving in,” explains Kieffer, a shy, thoughtful person who majored in philosophy and art at U of T. “And I don’t like it.” He mentions how a bike cop recently forced a street person to stop standing near a newly opened Starbucks. “The more people with money move in, the more people like that will be displaced.”

In this way, Rabble serves as a census for an often invisible demographic. Kieffer spent two years researching and illustrating the book, which combines clean, bold, black and white line drawings with assorted notes and commentary. (The entry for Norman, a male prostitute, notes that he is “usually picked up by guys driving pick-up trucks” and was “once spotted wearing only a towel.”)

Although not overtly political, Rabble is designed to draw attention to society’s outcasts. “I’m taking all this difficult stuff and forcing it into the reader’s face,” Kieffer explains. But given some politically incorrect territory (i.e. Retarded Crackhead), and seemingly ambiguous attitude toward his subject matter, it may be no surprise that his small, self-published book has generated big controversy, including a rowdy Q&A session during Kieffer’s book launch in April. 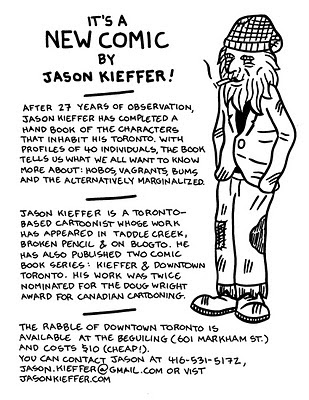 “Comics have long had the problem of being misunderstood,” explains Peter Birkemoe, owner of comics store The Beguiling. “And some people get really upset when a comic doesn’t meet their expectations or behave in the way it should.” The reception of The Incident Report, a recent novel by Martha Baillie, reinforces how Kieffer’s medium sent the wrong message. Consisting of semi-humourous memos about Budgie Man, Sheep Woman, Scruffy Chessman and other marginalized patrons of the Allan Gardens Public Library, Baillie’s appropriation can be considered equally controversial, but instead of earning outrage, her novel was long-listed for last year’s Giller Prize.

Still, Kieffer should not be entirely surprised that people have misinterpreted the intent of his book. Back in 2007, he posted two early profiles on BlogTO (Crazy Hand Lady and Rage Man). After a vigorous comment board pile-on among the digital rabble (e.g. “Yeah, there’s nothing more hilarious than mocking someone poor and mentally challenged”) Kieffer was asked to stop contributing to BlogTO.

“I like letting the work speak for itself,” Kieffer says. He carefully considered including an introduction to Rabble that would have explained his good intentions but eventually decided against it. “I’m happy with that decision, even though it leaves me open to attack, because people can assume what they want about me.”

Which is exactly what happened in March 2010 when Joe Fiorito wrote an outraged Toronto Star column about the book. Kieffer was most disappointed by the fact that Fiorito didn’t bother to contact him.

Too bad. Fiorito would have discovered, as I did, that Kieffer is a gentle soul, not a sniggering Vice magazine hipster. His biggest shortcoming, at least according to Birkemoe, is that Kieffer “is lacking in his ability to advocate for his work, which is true of many artists.” During our interview at Jet Fuel, Kieffer shifted uncomfortably and stared at the floor as he tried to explain why his work gets misinterpreted. “Some people think 'comic book equals funny',” he says. “But when I read through the profiles I don’t find them funny.”

Kieffer’s interest in the marginalized is both genuine and ongoing. His next book will be about street performer Zanta, a shirtless Santa who until recently roamed Toronto doing pushups. Eventually banned from significant chunks of the downtown core, Zanta now lives in the suburbs with a family member. “I’m doing the book because Zanta is a prime example of the way the city responds to people who don’t fit in or operate outside the norm,” says Kieffer.

Having lived in Cabbagetown his whole life, Kieffer has modified the dictum “write what you know” into “draw what’s around you.” Our tour concludes at Gerrard and Parliament in a tiny, triangular park. “This is the view from my apartment,” Kieffer says. He points across the street toward a third-floor window above a discount fashion store. At night, Kieffer explains, the park becomes a stage for addicts, prostitutes, and various drug disputes.

Rabble asks readers to determine for themselves which is worse: diligently recording the eccentricities of the less fortunate or ignoring them outright. Kieffer recalls being at a bus stop recently when an angry, disheveled woman tried to talk with commuters who refused her eye contact. “That’s crazy to me,” Kieffer says, neatly inverting the traditional definition of mental fitness. “That’s really horrible behaviour, super anti-social. I don’t know how you can treat other people like that.”