I've never met Ibi Kaslik, but based on her alt-weekly cover model career (see below), she strikes me as someone who poses first and thinks later. The Hour cover has her bra poking through (honestly, will that make anyone buy her book?), and her eye weekly cover is, at least to my eyes, less than thought through.

I realize that an author receiving this kind of publicity is a rare and beautiful thing, but I'm not entirely sure that either cover reinforces her stature as an author. I'm not trying to a be a fusty, musty old grump here. I just feel like Ibi could exploit herself in a slightly more interesting fashion. Unbuttoning your shirt and pretending to be a rock and roll rebel are tired cliches at the best of times. That these images have little to nothing to do with Ibi's abilities as an author is even worse.

I can't wait for 9th Wave Feminism to arrive and solve these and other problems. 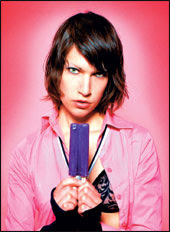 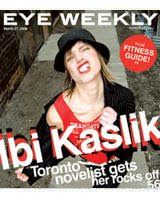 Space, always at a premium. My article in today's Star about Graham Rawle's book Woman's World was to include the following sidebar, but was cut for space:

TO MAKE A DADAIST POEM
Take a newspaper.
Take some scissors.
Choose from this paper an article of the length you want to make your poem.
Cut out the article.
Next carefully cut out each of the words that makes up this article and put them all in a bag.
Shake Gently.
Next take out each cutting one after the other.
Copy conscientiously in the order in which they left the bag.
The poem will resemble you.
And there you are—an infinitely original author of charming sensibility, even though unappreciated by the vulgar herd.

by TRISTAN TZARA, from 'Dada Manifesto on Free Love and Bitter Love', (c1920)

My article can be found here (link).
Posted by Ryan Bigge at 1:25 PM

Everything Hits At Once

* Episode nine of jPod was really quite bad. Episode ten was really quite good. As you may have heard, the show is cancelled, so my opinion is essentially meaningless, but there you are. Inconsistency was but one of many problems with the show.

* I was ill last week, with that cough-cold-fever thing all the kids are talking about. I watched a lot of TV, including season one of Mad Men. I started watching Mad Men when it first aired, but stopped after two episodes. I was encouraged by many people whose opinion I respect to give the show another chance. So I watched all 13 episodes this week. I’m still not convinced it’s a great show. It moves too s-l-o-w-l-y for me. I love the set, I love the scene at PJ Clarke’s, I love the re-creation of 1960, but sometimes that’s all there is. John Hamm (Don Draper) is a great actor, but I need more than that. Pete Campbell is a bit too repellant for my taste. There is a great essay to be written about the higher risk tolerance in 1960 (smoking, drinking and driving, child-rearing, etc) but I won’t keep watching the show. Especially after the (spoiler alert) audience-abusing final episode, where it’s revealed that Peggy is (unbeknownst to her) pregnant and about to give birth. Sorry, but no. Perhaps if the show was set in 1860, I might believe that particular twist. But no dice otherwise. (By the way, for a show that prides itself on historical accuracy, I caught a real doozy in episode six, where the redhead secretary says “You know what they say, the medium is the message.” McLuhan’s book Understanding Media, in which he coins that phrase, didn’t hit shelves until 1964.)

* Season Three of It’s Always Sunny in Philadelphia contained some of the finest moments of the show to date. The final few episodes lose a bit of the magic, but I can’t say enough about the character of Charlie in that show. He provides many moments of pure laughter and enjoyment, including his Night Man / Day Man song cycle. There’s less Danny Devito in season three, which makes for a better show.

* There are some big-time, scary-weirdo losers in the King of Kong documentary. We’re talking Crumb documentary here.

* Part of me, the nasty and venal and petty part of me, wants to be jealous and dismissive about a certain poet of the unconscious. (link). But I realize such thoughts are wrong. And I admit it’s a neat idea, worthy of a bit of attention. Obviously I’m biased, but I still can’t believe it made it into the Talk of the Town in the New Yorker. Still, should be a nice boost for Heti’s new book, entitled “How Should a Person Be?" I’m eager to learn more about her new book, but when I went to Anne McDermid’s website recently, I noticed something curious – Heti is no longer listed there. I no longer pretend to be even remotely in the loop anymore, but I do read Quill and Quire each month, and this seems like a semi-big deal. Curious.

* The Globe and Mail actual printed something critical about Richard Florida in their book review section today. I groaned when I saw that his book had received the front cover of the books section, but smiled somewhat to see that the reviewer didn’t like everything about it. I’m not quite sure why the Globe is fellating Florida to such an unprecedented degree. All I know is that it’s embarrassing.

* Finally, Hal N. is working on a new book about peep culture. (link). There is also going to be a corresponding documentary as part of the project. I’m of the impression that a small-to-medium amount of Hal goes a long way. I’m sure I’ll also be proved wrong on this too.
Posted by Ryan Bigge at 8:53 PM

Maybe The Streets of Brooklyn Aren't Paved With Paragraphs After All

Funny essay about the literary myths of Brooklyn by Colson Whitehead. (link)
Posted by Ryan Bigge at 3:41 PM

If The Devil is Six, Then Coupland is (Episode) Seven 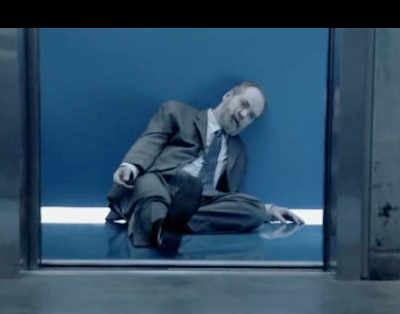 During the final few minutes of episode seven of jPod, there he was, the man himself, dead in an elevator. The dead Coupland appeared in Cowboy's cough-syrup induced hallucination / dream sequence, a Twin Peaks moment for Cowboy and a Hitchcock moment for Coupland fans. He was not in the frame for very long, but I imagine that he might reappear in episode nine or ten, if the show decides to stay true to the novel. Wait and see, same autoexec.bat time, same autoexec.bat channel.

The episode itself was solid, albeit with a few minor bugs and glitches. But there was a hilarious, hilarious scene with Carol on a swing, pretending to sing the praises of an open relationship. There was also a well-above-average moment, earlier in the episode, with a cop investigating boss Steven's disappearance.

As for my jPod spec script, I'm starting on my treatment, which is basically the script without dialogue. (Although apparently a treatment could have some dialogue). I should have a rough draft of the actual script finished for end of March.