I understand I'm being upsold, but do you really have to be so blunt about it?

I'm happy to report a bit of good news has occurred since I got all whiny about sharrows in the current issue of Spacing -- Bixi Toronto now has over 800 members signed up. (When my article went to press there were only 400). That's obviously very encouraging. (I should note that despite already owning a bike, I've signed up for Bixi. You should too.)

To celebrate, I'm posting the aforementioned article on my blog. I've also included two photos of a bike lane protest intervention at Harbord and Borden that I'm rather fond of.


In the spring of this year, sharrows appeared on College Street west of Manning. Neither a type of bird nor a new venereal disease, sharrows consist of a bike icon and two chevrons (arrow thingies) and are short for “shared lane pavement marking.” The first word of that phrase is clearly the most crucial, since “share” appears no less than nine times in the City of Toronto’s PDF explanation. The intent of sharrows is to remind drivers that cyclists also belong on the road, and are being tried on a few major downtown streets where it’s not possible to build a proper bike lane.
But the sharing message is clearly not being universally heard; this past summer, campaign vehicles belonging to both Joe Pantalone (a Smart car) and Rob Ford (a motorhome) were photographed parked in bike lanes. These incidents served as a reminders that Toronto cycling lanes continue to be treated as though they were invisible. If drivers refuse to recognize the legitimacy of the bicycle, then peaceful co-existence through sharrows is impossible, no matter how many times a municipal bureaucrat tells us that sharing, sharing, sharing, sharing, sharing, sharing, sharing, sharing, sharing the road is right thing to do. 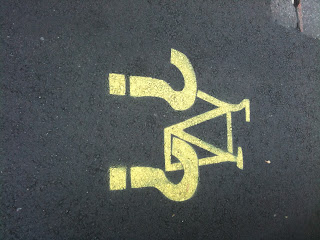 The best description of the problem comes courtesy of Spacing editor Shawn Micallef, who wrote in a March 2010 column in Eye Weekly that “Toronto is in the weird in-between space of being almost a full-on alpha city, embracing all its big-cityness, and just another second-tier city in the eastern part of North America.” In alpha cities like New York, driving is awful, while in second-tier cities, driving is still relatively pleasant. As Micallef concludes, “we’re in that middle zone of cityness: though it can be hard to drive here, the city’s transit and cycling infrastructures haven’t caught up to make not-driving a completely viable option for everybody.”

This in-between state helps explain the lose-lose political compromise of the sharrows and the defeat of the University bike lane trial in early 2010. Without realistic methods of alternative transportation, who can blame drivers for thinking they still deserve to own the road? Study after study demonstrates that creating a safe and inviting cycling infrastructure requires protected bike lanes that form a continuous grid. Making this happen, however, will require more than the benign neglect of the David Miller era – a mayor who prided himself on appearing to promote cycling. One can only imagine what a mayor actively hostile toward cyclists will accomplish in four years.
By not delivering on the ten-year cycling plan created in 2001 that promised 1,000 km of bike route (we got less than half instead), Miller has provided cycling opponents with a legitimate opportunity to backpedal on bike lanes. Certainly when compared with 2005, when only 1 km worth of bike lane was built, David Miller’s second term in office has provided the appearance of momentum. There were 34.9 km of bike lane created in 2008, 13 km in 2009, and 2010 promises and additional 5 km of lanes, along with 7.1 km of sharrows. Which makes this momentum illusionary, akin to someone working up a sweat on a stationary bicycle. 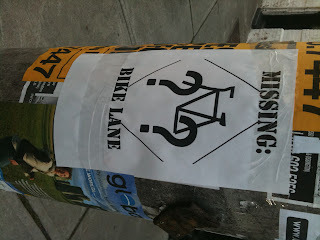 Granted, there have been some victories including the formation and continued growth of the Toronto Cyclists Union, secure bike lockers at Union Station the bittersweet success of the Jarvis street makeover; and the 2.1 magnificent kilometers that comprise the West Toronto RailPath. According to a January 2010 City of Toronto Cycling Survey, there has been a 6% increase in the number of cyclists in Toronto over the last decade (from 48% to 54%). However, “when asked to rate the quality of cycling routes and facilities in the city today, scores are the same, or in some cases, directionally lower than there were reported 10 years ago.”
This fall's launch of the Bixi bike program in Toronto will serve as an unofficial referendum on whether or not cycling is considered to be a safe and mainstream method of transportation. If Bixi fails to get 1,000 subscribers before the November 30 deadline the initiative will be cancelled (as this went to press nearly 500 people had signed up since Bixi launched on July 28). And who can blame people for not signing up for a bike share program in a city where cycling can be as aggravating as driving or public transit? (The 2009 Cycling Survey notes that “only one-third of cyclists say they are comfortable biking on major roads without bike lanes.”) David Miller proudly promoting Bixi without providing an adequate bike grid is putting the car(t) before the bike. 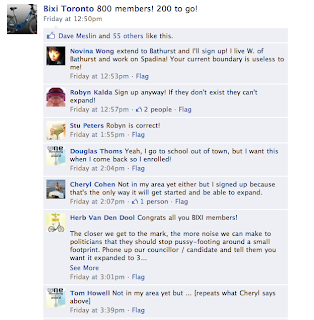 Bike lanes might seem like a minor issue given the various challenges the city faces, but our underperforming cycling grid is one of the reasons that Toronto has never appeared in Monocle’s Top 25 Liveable Cities index. (Montreal and Vancouver, meanwhile, both have.) While Monocle is guilty of promoting expensive lifestyle consumerism for global elites, it treats public transportation with the seriousness it deserves. As editor-in-chief Tyler Brule explained to PSFK.com in June of this year, Copenhagen ranks highly because you can take a train from the airport to downtown “and then you can immediately get on a bicycle and never have to deal with a car ever again. That’s why it does well.”
Toronto politicians and cyclists need to be more aggressive about the future of spokes on pavement. Instead of looking at cycling developments on a year-by-year basis, it might be more effective (if not more depressing) to consider the long-term picture. In the spring of this year a small photocopied letter to the editor of the Toronto Star appeared on various Toronto street poles. Titled “Real Bike Lanes Are Long Overdue!” it began by asking “What good is a bicycle lane if cars are allowed to park in it? The bicycle lanes of Toronto are an insult to cyclists. At best, they are ornamental.” The letter writer, Noa Stroyman, goes on to note that “The roughest pavement is always that which is in the bike lanes” and argues for protected, European-style bike lanes “as wide as a car lane, physically divided from the car lanes by a curb or poles.” 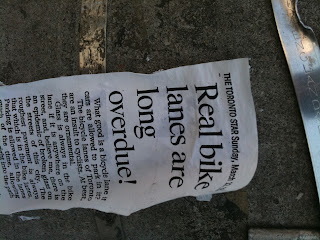 This combination wish- and shit-list is nothing new. Which was exactly the point the person who stapled this photocopy everywhere was trying to make. The letter was published on Sunday, March 12, 1995. Fifteen years later, the same problems remain. The number of kilometers of bike lane in Toronto is a meaningless metric until the psychology of cycling changes.
Becoming an alpha city, or even a world-class city requires multiple transportation options. Remaining a second-tier city means saying “no” to anything that might challenge the dominance of the automobile. By that measure, Toronto remains a sharrow-minded, second-tier city.
Posted by Ryan Bigge at 1:34 PM

Bike Lanes As Politicized As Abortion According to Rob Ford

I was reading my brand new copy of dandyhorse yesterday, which features profiles of various cyclists and/or mayoral candidates. I could not help but choke on the final Q&A from the Rob Ford profile:


What about the Toronto Bike Plan?
The problem with bicycles is that they have become a political issue -- saying I'll put in bike lanes gets the support of cyclists, but the rest of the voters will hate me. The debate has become equivalent to abortion -- whatever I say, someone will be angry. 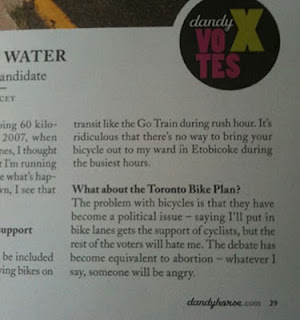