As Tim Falconer pointed out, Mr. Gee is not an inspired choice to cover City Hall.

So, Tell Me Ryan, Why Do You Hate Toronto?

Jarvis St. is a major north-south thoroughfare, with five lanes accommodating an estimated 28,000 cars daily. The route is made especially efficient by a reversible centre lane that changes to accommodate morning and evening rush hours.

This would no longer be the case under an ill-thought-out $6 million "streetscape improvement" plan to be considered by Toronto City Council as it meets today and tomorrow. Proponents of the redesign want to do away with the centre lane on Jarvis, which would leave only two lanes running in either direction. Sidewalks would be widened, trees would be planted, and there would be a bike lane.

There is a very real risk that these largely cosmetic changes would add to gridlock in the downtown core. The city's own traffic analysis indicates that travel time along Jarvis St., between Bloor and Queen Sts., would increase from eight minutes to 10 minutes. While admitting that's a large jump, on a percentage basis, staff concluded that the actual addition of just two minutes of travel time is "relatively minor."

I'm really quite comfortable with the Globe being against everything, but The Toronto Star? Really?

This makes me frustrated and angry, and it's an anger and frustration that's 10 years in the making. I want to say more, but it's not worth it -- my complaints will sound petty and stupid. I think I'll try and move to New York instead.

The Biggest Ideas * The Smartest Men

Keep forgetting to blog this: about a month ago, ideaCity announced its first 21 speakers. Four are women.

You might ask yourself why I keep writing about gender imbalance in relation to idea and essay based journalism. The short answer is that a few years ago, I was an associate producer for CBC's Go. Every week, once we were close to finalizing the line-up, there would be a conference call. Brent Bambury would ask a simple question: how many women do we have on the show this week?

Invariably there would be few or none. The two main producers were male, I was (still am) male. Only Elizabeth, the other associate producer, was female. And without trying, each week we managed to reproduce invisible gender bias. It really stuck with me.

So when the Walrus relaunched with almost no female bylines, I thought back to my Go experience. Fixing the problem can be as simple as saying "how many women do we have in the magazine this month?" This is not a quota system, or some other form of affirmative action that enrages the right. It's a simple act of reminder and repetition, but it produces results.
Posted by Ryan Bigge at 9:17 PM

When I Screw Up, I Regret The Error 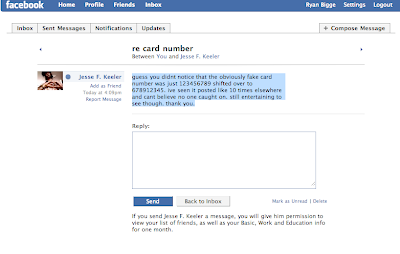 In the last few months some of my former U of T SCS students have had their work published. Congrats! Congrats!

Here are the associated links.

Globe and Mail, Facts and Arguments

Torontoist, about art and Honest Eds
Posted by Ryan Bigge at 8:39 PM

In a strange attempt to save money, the Saturday and Sunday Insight sections of the Toronto Star are now reprinting hefty amounts of web content in their print editions. This seems strange, when they could simply provide links to the articles on the Star's website.

That takes only one column inch, instead of the dozens of column inches they used to reprint those same articles in their newspaper. I am interested to see how readers react to this. If nobody really notices or cares that Insight is now curating the best of the web and putting it onto newsprint, a significant chunk of my soul will wither and die.
Posted by Ryan Bigge at 5:24 PM

Next, National Post Switches To Phones Without Fives On Them

Remember that old Steven Wright joke, about having a phone without a five on it, and not knowing how long he's had the phone, because his calendar has no sevens? Hard not to think of that when one hears that the National Post won't be publishing on Mondays this summer.