Chronology is for chumps. Themes are keen.

Music
I took three months of guitar lessons from Michael McKenzie at Red House Music Academy. He did all he could, but my lead guitar skills remain meh. Still, I managed to learn the solos for Touch Me I’m Sick (Mudhoney) and School (Nirvana).

My old drummer Stefan was kind enough to create a GeoCities CyberPage for my cover band SubPox. We played our first show (a house party) in September before Mark Cluett, bass player extraordinaire, moved to Glasgow.

I also caught a few great concerts: Weaves at the AGO, Metz at Lee’s Palace and Dilly Dally at the Horseshoe. And after convincing myself that Ride would never reunite, I was beyond ecstatic to see them at the Danforth Music Hall in June.

Bike Tourist
I’ve finally realized that my favourite part of travelling is being on a bike. I see more of a city, at the right pace, when I’m on a bike. And I’m in control: no waiting for subways, buses or taxis. I love to walk, but it doesn’t always do the job.

In September I biked across the Golden Gate Bridge. The next day I rented a bike from Mission Bicycle Co. and did The Wiggle to Golden Gate Park and kept going until I reached the ocean. Then I did the reverse and managed, thanks to Google Maps, to reach City Lights Bookstore with a minimum of pushing the bike up hills. 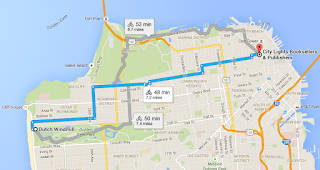 My Airbnb in Portland came with a bike, and I rode the hell out of that thing, covering a lot of ground on both sides of the bridges in two days. It was very difficult to return to Toronto after experiencing bike utopia.

I also discovered that Seattle now has Bixi, although I would dissuade most people from using one to get to Capitol Hill.

Art Tourist
The other big reason I like to travel is to see stuff framed on walls. I was mesmerized by Rebirth of the World, an enormous triptych video installation by Chiho Asoshima at the Seattle Asian Art Museum. It was narratively and visually dense, packed with surreal, beautiful and otherworldly landscapes and characters. I watched it three times.

In May I attended a performance of Nyloid at the Montreal Museum of Contemporary Art. The first 10 minutes were mesmerizing and awe inducing, even a touch scary. Then the giant triffid stopped working, and the spell it had cast broke along with it.

The Art Institute of Chicago is enormous, serene and heated – all important qualities when you visit that city in February. The security guard at the Seattle Art Museum showed me a new route to the ticket desk with so much enthusiasm that it set the tone for my entire visit.

The Portland Art Museum seems small but isn’t – a whole bunch of modest rooms eventually added up to a lot of art. Similar phenomenon at the Museum of Contemporary Art in Chicago.

Traditional Tourist
I was surprised at how much I enjoyed the Newseum in Washington, D.C, and without trying, I spent almost three hours there. Also glad that the nasty-windy walk to the Chicago Museum of History from the “L” was worth it.

I went to Alcatraz and yes, the audio tour is great, and yes, my neighbour Matt was right to tell me to buy tickets way in advance because it sells out. Without a doubt the most touristy thing I did this year, except for taking the Seattle Great Wheel, which was whee!-ly fun.

I also had lunch at the Facebook campus. It was delicious and free. I “liked” it.

Other Art
I hate writing sentences like this, but the best exhibit I saw in 2015 was “The Flesh of the World” at University of Toronto Art Centre. I liked it so much I created a tagline for the show to help promote it. It was difficult to determine the theme of the show based on the marketing materials the gallery produced. I lost track of how many people I told to see that show, but I fear my enthusiasm might have had the opposite effect.

I attended three art lectures this fall, something I’ve never done before. They were all great, each in very different ways, and I’m grateful for the insights from Hito Steyerl, Janice Kerbel and Taryn Simon.

Technology
I heard Micah Elizabeth Scott talk twice this year – the first time at a poorly promoted free talk at TIFF in early March about how she created Forest for digiPlaySpace at TIFF. The second talk, a month later, was a not free talk at FITC. To my surprise, the FITC talk was far more personal and revealing, despite her speaking to a larger audience.

This year’s Maker Faire at the Toronto Reference Library was fun and offered an affordable, well-organized option to solder your very own blinking LED rocket ship pendant. I admire well-planned, large-scale experiences, because I know how difficult it is to make them function smoothly.

I’m not sure if visiting a bunch of 8-bit arcade bars counts as technology, but this year I went to both Chicago locations of Emporium, Ground Kontrol in Portland, and Shorty’s in Seattle. (I also went to Brewcade in San Francisco, which was a pale imitation of the real thing – that being Barcade.) And, of course, relatively frequent trips to Toronto’s Get Well.

I went to Startup Open House again this year, and enjoyed it, although maybe a little less than last year. The Varagesale offices were something to behold, however.

And I attended a handful of Civic Tech Toronto hack nights before I became too overwhelmed with full-time work. A shame, because I heard some amazing guest speakers, including Iris Ko and Kevin Branigan.

Misc.
I did a fair amount of volunteer work with Story Planet in 2015. Their Alpha Workshops (now called Storymaker Workshops) are where I seem to add the most value. That’s a weird thing to say, but being an effective volunteer means figuring out what you’re good at.

I took my best friend’s son to Vancouver’s Science World in June and again in December He’s 8.5 years old, which meant the outing required zero heroics from me, but I was inordinately proud that we had lots of fun and that I brought him back home in one piece both times.

I made a t-shirt for my annual street party, and it’s awesome. I wrote an article about dive bars, and it’s also awesome.

Food and Drink
I travelled solo through Chicago, San Francisco, Portland, Seattle. I’d like to extend special thanks to the waiter at The Publican (Chicago) for treating me exactly like anyone else in the restaurant. And extra special thanks to Colyn, the bartender at Tasty n Sons in Portland, who gave me three great suggestions – Kennedy School, Pip’s Doughnuts and Sen Yai.

I spent many hours at Propeller Coffee during the first part of 2015. Great coffee, great space, cool baristas. Based on my receipts, The 47 is my favourite local spot. I also had a great Saturday in July on the patio of The Gaslight, enjoying a BBQ sausage dog with potato chips and all the fixings.

In terms of local craft beer, I spent quality time at Wisebar and Wenona. The best beer I had this year was Allagash Curieux (aged in Jim Bean barrels) at Mikkeller in San Francisco. The best cocktail of 2015 was a Glasgow Smile at Barlow Bar in Portland. (Scotch, smoked rosemary, honey, dandelion-burdock bitters, barlow cube.) The second best was a Dead Something [I forgot the rest of the name] at The Matchbox in Chicago. 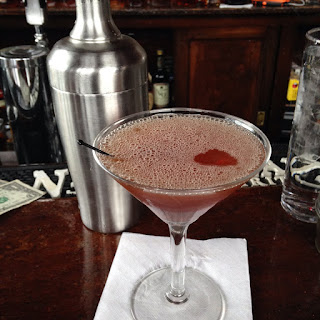 Summary of 2015 in a tweet
Beer, bourbon and bikes in seven different cities. Art, 90s tunes and old video games back home.
Posted by Ryan Bigge at 4:58 PM