But it isn’t the stereotype of Don Draper that is so attractive; it’s his desperate need to break out of the stereotype. Much like the characters in Richard Yates’ Revolutionary Road and Tom Perrotta’s Little Children—both recently made into films—he suffers from a classic case of upper middle-class suburban angst, adults petrified by how ordinary they’ve become. With his taste for strong women living outside the very rules he feels boxed in by, Don Draper seems as though he just might understand all angles of the domestic equation. “His sense of yearning, his sense of being confined by the home yet also craving that confinement and comfort, I identify with it,” said a Brooklyn mom of two and Draper-phile in her mid-thirties whose husband, a “screenwriter,” works from home while she commutes to a publishing job in Manhattan.

From the New York Observer (link).
Posted by Ryan Bigge at 12:14 PM

Thank You Bougatsos, Your Candor is Most Refreshing

Ms. Bougatsos is ready for the attention. “There’s no such thing as selling out in my mind,” she said, adding that she would love to have her music featured on a TV show soundtrack: “A Jeep commercial, a tampon commercial, anything,” she said. “We’re a band, we make music, and that’s what we want to be known for.”

Check this out, from the November 2008 issue of Toronto Life: 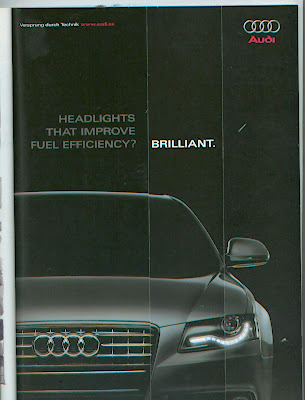 Can you see the two flaps on the Audi ad? 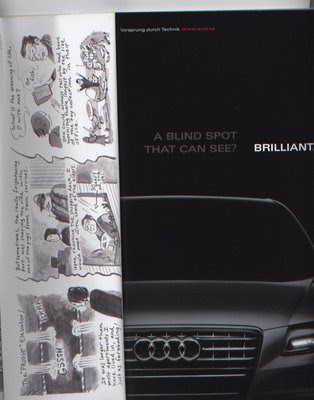 That's right, the comic memoir by Lorenz Peter that began on the opposite page of the November, 2008 issue of Toronto Life continues underneath the Audi ad. 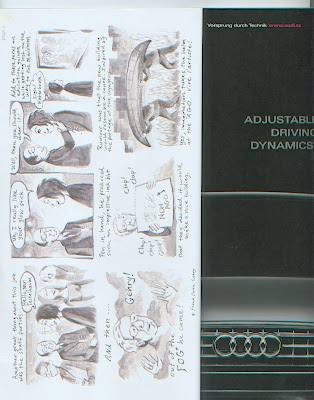 Yep. There's the rest of the comic memoir of working at the AGO, buried beneath the second Audi ad flap. Words fail me.
Posted by Ryan Bigge at 6:19 PM

Just discovered The Believer has the full text of the Tim and Eric interview online.