As part of my trip to New York in early May, I went to the Guggenheim to see the Francesca Woodman show.

I didn't realize the photos were mainly nudes -- I had to sheepishly explain to my wife that New York magazine declared it a "Critic's Pick" but had failed to mention the nakedness.

As it happened, my favourite photograph did not involve nudity. But it wan't included in the exhibition catalogue either. I tried taking a photo of it in the gallery (tsk, tsk -- not supposed to do that) and it turned out a blurry mess. 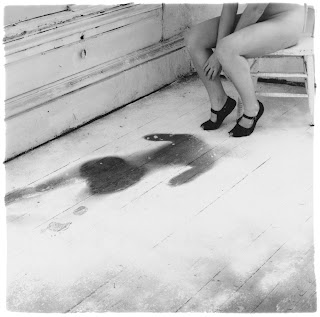 And then, by complete fluke, I found a high-res version of the image I was after through the Paris Review blog. (Click above image for article).

If you don't already know, Woodman committed suicide at age 22. This image combines a chalk outline element, a lingering shadow, with her hidden, off in the corner, perhaps contemplating her after-image self. It's an obvious reading of the photograph, but so what. Sometimes art is obvious.

The digital backlash and the rise of physidigital


Despite being a dozen or so years younger than me, my 25 year old friend Adam and I share a surprising number of technological touchstones. He’s a part-time DJ who only plays vinyl 45s and owns (and actually uses!) a typewriter.

Adam’s predilection for analog media might sound anachronistic, or even sadly unhip, but instead his anti-digital tendencies now put him on the cutting edge of a contemporary subculture.

Everyone is familiar with the rude snub fans can give their favourite band when they become too mainstream. In the same way, a small but growing number of artists and culture mavens have begun expressing their frustrations with the digitization of everything. 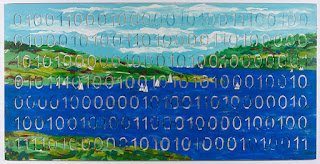 The fancy term for music, books and photographs being converted into zeros and ones is "dematerialization." Spotify might be a tremendous service for music fans but try impressing someone with a record shelf full of cloud storage. For anyone who has lost a hard drive’s worth of photos or MP3s the limitations of a world where art and culture are no longer anchored to a physical object are clear.

To escape this binary trap in December 2010, during my residency at the Canadian Film Centre Media Lab, I began researching the emerging shift toward rematerialization. I discovered a company that prints posters of your Tumblr followers (socialprintstudio.com) and another that can publish a book of your favourite Tweets (tweetbookz.com). Even the high priestess of low culture, Lady Gaga, noted last year that her new Polaroid mobile printer would ensure that precious images “will no longer die a death on your cell phone or digital camera”.

Drawing inspiration from these and other examples, my team at the CFC decided to create a physical manifestation of a digital experience. What began as drinking straws in a cardboard box eventually turned into a prototype for txt2hold, a service that debuted in May 2011 at Maker Faire Toronto. Txt2hold takes any text message forwarded to our system and incorporates it into a unique paper sculpture. Or, to be more precise, an origami pyramid that’s colour coded according to the emotional content of the text, thanks to the assistance of a sentiment analyzer called Lymbix. The idea proved so popular that for Nuit Blanche 2011 our team was asked to create a modified version of the system that converted Twitter @replies into paper birds.

Since then, I’ve seen numerous rematerialization projects, including BERG’s upcoming Little Printer (bergcloud.com/littleprinter) and a hacked telegraph called Tworsekey that can send Tweets via Morse code.

This does not mean, however, that the 21st century will be predominantly Amish, even if a Portlandia sketch joked - “Remember when kids grew up to be artisan bakers and everyone had homemade haircuts and guys shaved with straight razors?” - that the latest hipster craze involves a return to the 1890s. Instead, the future will be neither purely digital nor analog, but a messy hybrid of the two. And to acknowledge the awkwardness of this fusing of the past and the present I’ve created a gloriously clunky neologism: “physidigital."

Novelist William Gibson famously observed that the future is already here, it’s just not evenly distributed. The past, meanwhile, remains everywhere, and we shouldn’t be afraid to get physidigital by jamming a USB drive into an old cassette tape.

Even Adam, alongside his typewriter, owns an Android phone that allows him to remotely download and launch a torrent file on his home computer. He might be technologically eccentric, but that doesn’t mean he’s crazy enough to abandon all modern conveniences.