How to gauge time

I went to a talk a month or two ago. A panel discussion to be precise.

Does it matter which one? It doesn’t. A lack of identifying details means everyone can retain their dignity. Plus it was a free event, so what right do I have to complain?

The structure of the talk was thus: each of the three guests would speak about their work for 10 minutes. Afterwards, the moderator would toss some provocative questions at the panel.

The first guest spoke for almost exactly 10 minutes. They had 10 minutes worth of material to convey. Good job.

The second guest spoke for a little over 10 minutes. I’m guessing they had prepared at least 15 or 20 minutes worth of material. I was sad when the speaker stopped. I could have listened to the second guest for 40 minutes.

The third guest spoke for at least 20 minutes. Probably closer to 25. They had prepared at least 30 or 35 minutes worth of material. At the 15 minute mark, I began to resent the third speaker for ignoring the time limit. If anyone should have bent the rules, it was the second guest.

The event was scheduled to last 90 minutes, but the question portion of the evening only started at the 90 minute mark. Adding to my delight, the moderator started asking 12-part questions. In short: I wasn’t entirely happy with the event. And yes, it was free. So I should just chill.

But this is a reoccurring problem, and a solvable one.

A few weeks after the great panel failure of 2014, I went to my first Pecha Kucha event. I was curious to see how the guest speakers would adapt to the imposed time limit. (You get 20 slides, and only 20 seconds per slide). Guess what? Everyone did a superb job. The slides advance automatically, nudging the speaker along. And everyone knows that 20 seconds is not a lot of time – it’s less than a TV or radio commercial.

But 10 minutes? That’s a small yet undivided chunk of time. If you’re the organizer of the event, you might need to ask the speakers to pick three projects that best exemplify their work, creative approach or philosophy, and then spend about three minutes per project going into more detail. That leaves each speaker with a minute or so to introduce themselves. Or give them 15 minutes and ask them to do the same thing (best three projects). Anything that segments that chunk of time into something more meaningful and manageable.
Posted by Ryan Bigge at 2:28 PM

Take this employee and shove them

A few months ago, someone I know decided to leave one company and take a job at another company. Happens all the time.

On their final day of work, this person ran into someone from upper management. And what happened next was one of those juicy, teachable moments that would make for a perfect Harvard Business Review blog post.

A bit of back story. The individual in question worked for the same company for a few years. Not only that, they recently participated in a couple of company-sponsored extra-curricular creative projects on their own time. Not only did this bonus work demonstrate initiative, but it served as evidence that the company was taking a new approach to problem solving. (In fact, one of the creative projects this person developed was prominently featured on the company’s website.)

So when this person ran into Someone Important From Upper Management (SIFUM), they assumed that SIFUM would A) be aware they were leaving the company and B) would have something pleasant to say to them given their years at the company plus the aforementioned bonus work.

As it turns out, SIFUM acknowledged that it was the person’s last day at the company only after being prompted. And then silence. The SIFUM failed to wish the person well in their new role, or thank them for their time and contributions to the company.

This made the person I know angry and disillusioned. You can bet they will tell this story to many, many people. And if someone asks her or him if they should work at SIFUM’s company, she or he will tell the above story as way to illustrate the significant blind spots in the company’s culture.

A quick compliment would have cost the SIFUM nothing. Their silence, on the other hand, might turn out to be very expensive.

The novel is set in the early 1970s. But it wasn’t until the 100 or 150 page mark that I realized Colum McCann wasn’t mentioning (m)any brand names. The novel is clearly a product of exhaustive research, but McCann manages not to bludgeon or otherwise punish the reader with everything he knows. As Jonathan Lethem noted an interview with Hazlitt, “I also had to throw out a lot of what I learned—novels are quite intolerant of information; you actually can’t stick too much in or you’ve started to do something else.”

Now details aren’t the same as information, but I basically stopped reading The Ice Storm by Rick Moody after a half-dozen pages because of this passage:

He headed for the Williamses’ bathroom. One last look. A survey of the medicine cabinet. He wanted to see if there was a diaphragm in there at all, to see how deep the slight ran. He wanted evidence.
Where would Janey have gone? To the A & P to find something to go with turkey leftovers? To purchase beauty aids in preparation for the Halfords’ party that evening? Maybe she had gone to his house, to rifle his own medicine cabinet?
Hood set the bottle of vodka on the speckled, beige, faux-marbleized countertop and poured some more ambrosia. Then he began to peruse the remedies on the other side of that mirror: Cover Girl Thick Lash mascara, Revlon Ultima pancake, Max Factor lipstick (chocolate), Helena Rubinstein Brush-on Peel-off Mask, Kotex tampons, Bonne Bell Ten-0-Six lotion, Clairol Balsam Color (blond, although she frosted her hair). Summer’s Eve disposable douche, Spring Breeze. Valium, Seconal, tetracycline, the first of these in a renewable prescription.
No diaphragm case.
In a tiny space at one end of the top shelf, Jim Williams apparently kept a few things. The Dry Look, Old Spice deodorant, Noxzema Shave Cream, Water Pik teeth-cleaning system. Vicks VapoRub.
It was an L-shaped bathing suite. Hood drained his glass and ducked into the alcove where the toilet and shower were shrouded in darkness. On top of the toilet, Janey had piled Clairol Herbal Essence shampoo, Clairol conditioner, and Tegrin medicated shampoo.

It’s only 240 words, but that medicine cabinet suffocates the novel before it has a chance. Here are the brands mentioned above as a list:

The lie I tell myself finally came true

Almost every Sunday, starting around 4 or 5pm, a strong yearning for beer asserts itself. I’m lucky in that there are at least two decent bars nearby – Boo Radley’s and The Three Speed. I’m partial to Three Speed for a variety of reasons, including the fact that I can sit alone at the bar and not appear to be a sadsack extra in an Edward Hopper painting by virtue of the fact that I know a few of the bartenders.

But instead of simply going to the bar every Sunday like a normal person, I start a stupid little argument with myself about mixing pleasure with productivity. Followed by vague Protestant guilt and concerns about eating healthy.

Anyway, last Sunday I decided that I would go to Three Speed, regardless of the physical, spiritual and emotional consequences that would rain down upon me. As always, I brought a notebook and a pen. 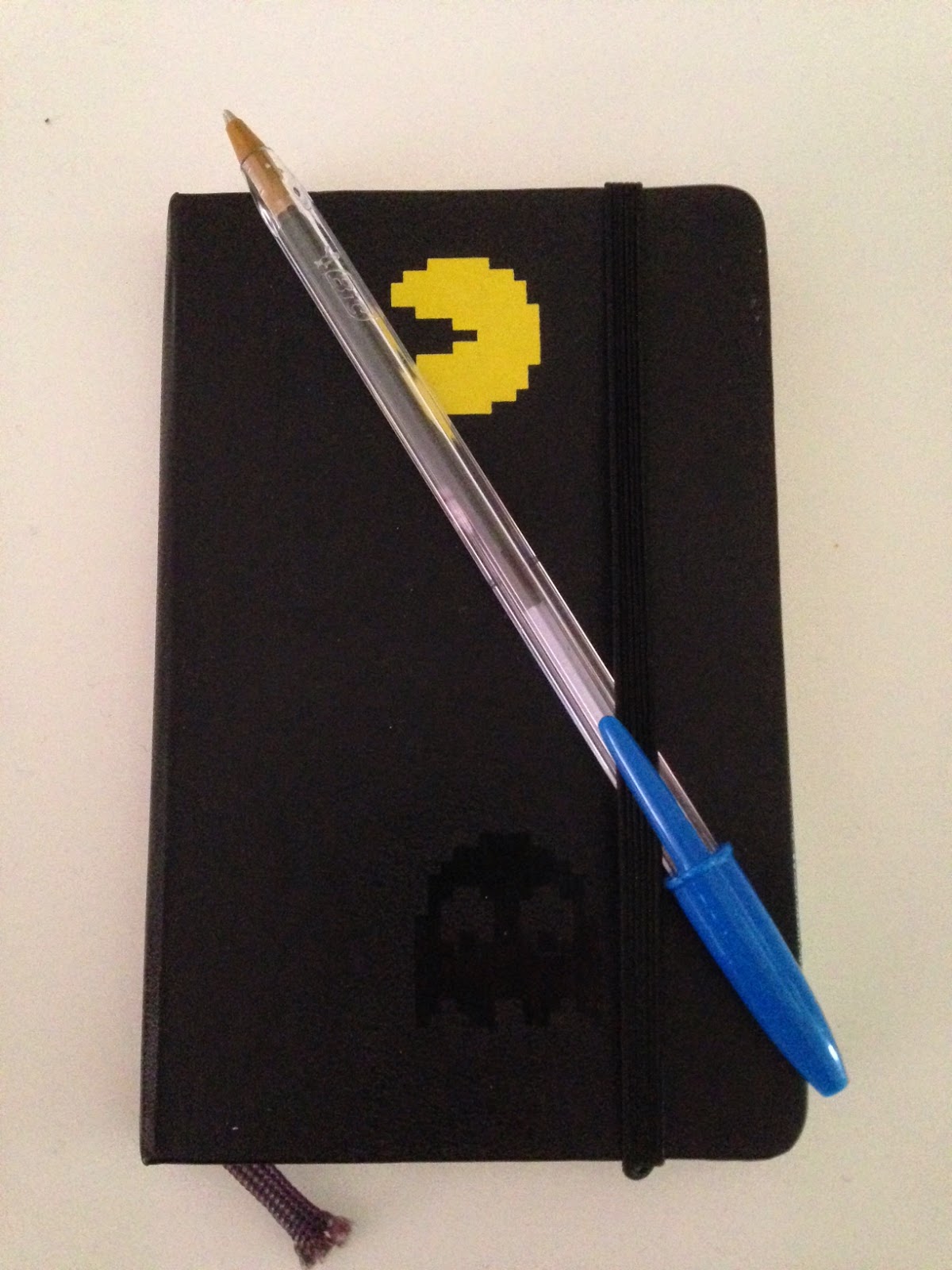 The notebook and the pen are the main actors in the lie I tell myself. That being, I’ll sit at the bar and get some creative writing accomplished. Of course, about half the time I might as well be playing Tic-Tac-Toe against myself. If I’m lucky, I’ll get a few ideas that are “Feed the tuna fish mayonnaise” caliber.

Every once in awhile, however, it actually works out, and the lie is not a lie at all. Let me tell you – last Sunday evening was a beautiful thing. Page after page of ideas, dialogue and description.

I’m pretty confident that the reason the ink flowed in magic patterns was due to the simple fact that I haven’t sat down and written for awhile. I also managed to not cram every last chore and to-do into the weekend. Often I want a beer on Sunday because I’m tired and I want to relax. The last thing I actually want to do is write. This time, it was the only thing I really wanted to do, and I happened to have a few beers while doing so.
Posted by Ryan Bigge at 2:48 PM

The UX Detective Episode One: Westjet

A few weeks ago your humble sleuth received an email from Westjet with an exclusive code for Westjet Rewards members:

First I visited the main Westjet site and checked out some flight options:

Then, because I had some Westjet dollars in the bank, I went to the Westjet Rewards booking site:

Do you see my error? It took me at least two minutes to figure out the problem. I now realize I was relying on visual cues to guide me.

That’s why I assumed the Westjet Rewards page followed the same format as the email and the main website. But if you look carefully, you can see that they’ve reversed the code order. Which was very confusing to me, especially given the visual cues of the short and long boxes.

In the end I got my flight. But the lesson is: if you’re going to train your customers to use your site, make your UX consistent. Otherwise they’ll think your site was designed by Moriarty himself.