"For one thing, Toronto may have dodged a bullet: Smitherman was a lousy candidate who never managed to define what he believed in ... He struck me as nervous and shifty -- not a natural leader."
-- Toronto Life, Editor's Letter by Sarah Fulford, January 2011

"[T]he city is ready to bust out of its self-stifling punctiliousness … We need a brash mayor who will throw some weight around. Which brings us to George Smitherman, the oddsmakers’ favourite in the October 25 mayoral election … Smitherman is staking his campaign on the issue of job creation, while his rivals are proposing no end of brazen ideas—from subway networks to privatizations to casinos—in an effort to be what he already is: larger than life.

The Conservative strategist Jaime Watt—one of the architects of the Harris Conservatives’ two majority election victories and a partner with Navigator, the PR firm, and now one of the key players on Smitherman’s campaign team—once said that the key to image management isn’t to make a politician into someone he’s not, but to convince voters that a particular politician, warts and all, is the person they want to elect for the job at hand. And George Smitherman is looking more and more like the proverbial right guy in the right place at the right time."
-- Toronto Life, 50 Reasons to Love Toronto, Philip Preville, June 2010
Posted by Ryan Bigge at 9:02 PM

Funny Ladies
Canadian Jessica Holmes is the latest female comedian to trade stage for page
Chatelaine | October 2010 | Ryan Bigge
In January 2009, exactly two years after Vanity Fair claimed women aren’t as funny as men, Tina Fey got revenge by appearing on the magazine’s cover. Not only are female comics as hilarious as their male counterparts, they are also now storming bestseller lists as well as sitcoms and stages. And their rising popularity means female funnybooks are now being taken very seriously (so to speak) by publishers and readers alike.
Royal Canadian Air Farce’s Jessica Holmes is the latest comedian to humorously over-share with her new memoir, I Love Your Laugh: Finding the Light in My Screwball Life. Her book combines family zaniness (her father’s predilection for buying crappy brown cars) with an emotionally revealing look at various professional and personal humiliations (such as going to a drugstore to return a box of condoms during the height of her Air Farce fame). 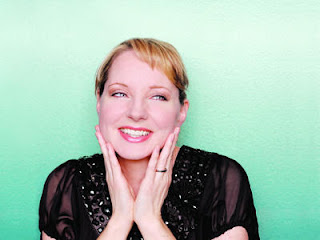 Holmes’ philosophy is that you cannot die from embarrassment — it will only make you stronger (and funnier): “Whatever you experience at the time, hopefully in the end it’s something you can laugh about.”
Today Holmes has plenty of company on bookstore shelves, including The Daily Show’s Samantha Bee (I Know I Am, But What Are You?) and Sarah Silverman (The Bedwetter). But this wasn’t the case when she began the book. “It was only after I started writing that Kathy Griffin’s book came out,” Holmes explains. “I thought about studying the technique for writing a book, but in the end I just decided to literally put what was in my brain down on paper.”
While Holmes jokes that “books don’t pay the mortgage” because most authors earn “six cents an hour,” the quip isn’t entirely accurate. In October 2008, Tina Fey signed a book contract worth an estimated $5 million — proving that female punch lines can be very good for a publisher’s bottom line.
(Chatelaine article link).
Posted by Ryan Bigge at 1:03 PM

I interviewed Steve Martin for Chatelaine back in September and he mentioned Deborah Solomon as an art writer he admires. Given the recent hullabaloo about Martin's recent appearance at the 92nd Street Y (where he was unsuccessfully interviewed by Ms. Solomon), I thought I'd post it here. I should also mention that, like Solomon's Q&As in the NYTM, my interview with Martin was condensed and edited.

The recent downturn in the real estate market apparently means that agents can no longer afford to use vowels.
Posted by Ryan Bigge at 1:15 PM