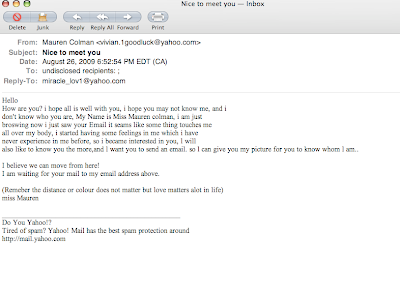 I Don't Envy These Green Authors

It's Funny Cause It's True

"Colder Than Most People From Toronto." (link).

Toronto is Little Better Than a Photocopy of a Proper City

"This is a familiar Toronto syndrome, the nagging certainty that what's happening in Toronto is nothing more than a subpar pantomime of some authentic, spontaneous, amazing totally better thing happening elsewhere."

Martin Amis via London Fields, you have the floor:

[T]here was a telephone box at the very junction of Lansdowne Crescent and Ladbrooke Grove … There was no one in the telephone box. But there was no telephone in it either. There was no trace of a telephone in it. And there was no hint or vestige of a telephone in the next half-dozen he tried. These little glass ruins seemed only to serve as urinals, as shelters from the rain, and as job-centre clearing-houses for freelance prostitutes and their clients. In widening circles Guy strayed, from one savaged pissoir to another. He hadn’t used a telephone box in years, if indeed he had ever used one. He didn’t know what had happened to them and to vandalism – though a serious glance at the streetpeople who glanced at him so mirthfully, as he rummaged behind the dark glass or stood there shaking his head with his hands on his hips, might have told Guy that vandalism had left telephone boxes far behind. Vandalism had moved on to the human form. People now treated themselves like telephone boxes, ripping out the innards and throwing them away, and plastering their surfaces with sex-signs and graffiti …

He marched two blocks in the rain before he found a dial tone. At the first twin phone bank he came to, one instrument was castrated, with colored tassels at the end of its cord, and all that remained of the other was four bolt holes. The phone at the next intersection had chewing gum in its coin slot, and the line of its companion was completely dead. The standard way for a man in Chip’s position to vent his rage was to smash the handset on the box and leave the plastic shards in the gutter, but Chip was in too much a hurry for this. At the corner of Fifth Avenue, he tried a phone that had a dial tone but did not respond when he touched the keypad and did not return his quarter when he hung up nicely or when he picked the handset up and slammed it down. The other phone had a dial tone and took his money, but a Baby Bell voice claimed not to understand what he’d dialed and did not return the money. He tried a second time and lost his last quarter.

He smiled at the SUVs crawling by in ready-to-brake bad-weather automotive postures. The doormen in this neighborhood hosed the sidewalks twice a day, and sanitation trucks with brushes like the mustaches of city cops scoured the streets three times a week, but in New York City you never had to go far to find filth and rage. A nearby street sign seemed to read Filth Avenue. Things cellular were killing public phones. But unlike Denise, who considered cell phones the vulgar accessories of vulgar people, and unlike Gary, who not only didn’t hate them but had bought one for each of his three boys, Chip hated cell phones mainly because he didn’t have one. 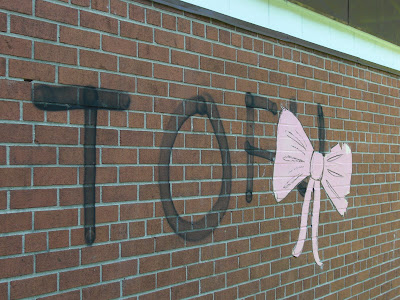 I first noticed the strange four-letter word written in black spray paint in Liberty Village, during last year's Nuit Blanche. On the shins of three concrete plinths near the south end of the Lamport Stadium parking lot, in uppercase letters, was the word TOFU. It was simultaneously funny (what sort of miscreant selects soybean protein as their semiotic weapon?) and enigmatic (how best to respond to such a non-sequitur?) Still, it held my interest, despite having viewed an evening's worth of competitively creative contemporary art, so I took a quick photograph and forgot about it.

But it turned out that TOFU was not a one-off conceptual prank without a punchline. The word has appeared frequently on walls throughout the city during the last few months. The lettering might be small – polite by the standards of graffiti, though no less illegal – but the tagger has been persistent, depositing little blocks of TOFU throughout the west end: the Brock Street railway underpass, a street sign near Dundas and Brock, a storefront near Bloor and Ossington, a green pole in Trinity-Bellwoods. An occasional variation in colour (white and pink) and altitude (the tagger enjoys both horizontal and vertical lettering) is the only thing that separates the tags.

Then came the TOFU tipping point, when this curiosity went big. The rear brick wall of the public washroom in Fred Hamilton Park, adjacent to the bocce pit, was struck with a half-metre tall version of the word.

No longer ignorable, the outsized headline was a provocation that forced anyone who passed to try to wring meaning from a word that seems chosen for its ability to deflect any deeper meaning. As Toronto novelist Lilian Nattel wrote on her blog in late May, "what kind of streetwise graffiti-ist inscribes TOFU on the walls of park buildings?"

Perhaps the best way to analyze TOFU is to determine what it is not. It does not seem to be a street-level marketing campaign. Many advertisers use teaser campaigns that blend street art and advertising into something that is both and neither.

But it's impossible to believe someone would try to infuse this milquetoast substance with underground cachet and give the product some edge. (As a lapsed vegetarian, I've earned the right to speak insultingly about my bland white frenemy). And one word, repeated ad nauseam, is not likely to convince anyone to buy a block of herb tofu anytime soon.

As pure artistry, TOFU also fails – even if the paint is, as I hope, vegetable-based. Stylistically, it refuses to echo the curved, bubbly letterings of high-style graffiti. Being so unadorned, it cannot carry itself on style. And with but one simple word, it is lacking in substance as well. The decision to be vegan or vegetarian is often informed by political or ethical leanings. Surely a few more words are required to make a coherent argument.

Or perhaps not. Michael Portnoy set the low bar for vegan civil disobedience back in 1998, when he snuck onto the stage and danced shirtless beside Bob Dylan. Scrawled on Portnoy's chest, in black greasepaint, was the phrase SOY BOMB. Over a decade later, it's safe to say his plant-based protein bomb has yet to detonate.

While neither advertising nor art nor coherent political protest, TOFU has managed to cut through the textual clutter of urban life. The irony, of course, is that tofu absorbs the flavour of whatever it comes in contact with, blending into food like vodka in
a cocktail.

Documented and puzzled over on Toronto blogs and Flickr accounts, the TOFU mystery has earned our attention, even as it frustrates an explanation.

Is it an acronym? The latest bit of slang? Yet another visible secret of urban life, like shoes draped over a powerline?

Through repetition and prominence, TOFU speaks silently to anyone willing to listen.

I received this very pleasant email on Monday:

Perspective is a weekly section that focuses on more in-depth analysis of issues, culture, life, society, history, art, literature...well, you get the idea. We would, of course, give credit where it’s due, plug the blog and Smart Set, etc.

Please feel free to go retro and give me a call. If calling the office is just too old-fashioned, my cell is XXX-XXX-XXXX.

So I, of course, asked the fine people at FeatureWell to deal with this reprint request, since the article was syndicated through them. You'll notice, of course, that nowhere in the email is any mention of payment. This also occurred the last time I received a very pleasant email from a very pleasant newspaper editor wanting to reprint my very pleasant twitter article. However, FeatureWell managed to get a small fee out of that newspaper (less than $100).

This time, however, no dice. The Arkansas D-G refused to cough up payment of any kind. That's more than a little sick and disturbing, in my estimate.
Posted by Ryan Bigge at 4:01 PM