Any year with a 13 is bound to be tricky

To mangle Joan Didion, we tell ourselves year-end summaries in order to live. 2013 was a hell of thing. 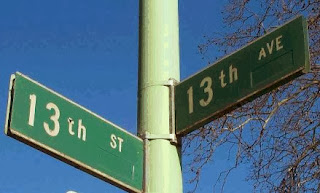 In a year of not goodness, here are the events that I will remember as enjoyable:

Went to New York and managed to get into the Rain Room.

Did the Grouse Grind in under an hour.

Gave feedback on a beta version of Jacqueries, an interactive Toronto dance performance inspired by Sleep No More.

Volunteered at the Intergalactic Travel Authority and ended up making a zine in the process.

Spent many glorious hours at Game On 2.0 at the Ontario Science Centre.

Learned the chords to “Touch Me I’m Sick” by Mudhoney. (The solo eludes me still.)

Did jury duty for a week and it wasn’t awful.

Went to a secret screening of a well-known space movie at the Revue cinema.

Successfully completed not one, but two minor car repairs at a total cost of $5 thanks to online tutorials. Estimated cost if a mechanic had done both? At least $300.
Posted by Ryan Bigge at 9:30 AM

I said something like this when trying to describe SXSW Interactive 2014, and then gave up and resorted to FOMO. This is much better:


"Austin during SXSW is a bubble. With everyone staring at their phones, it resembles a roving and only notionally offline social network, in which something cooler and more interesting is always happening elsewhere." -- Jacob Silverman, The Baffler #23 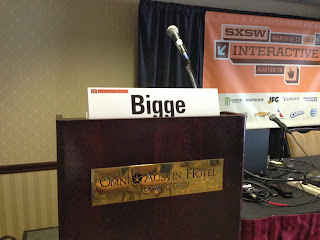 The system works (sort of)

Last night I went to see Alvvays at The Drake. Thanks to the miracle of Bandcamp, I gave Programm a quick listen, since they were playing before Alvvays. I liked them, so I got to The Drake early. Turns out they're a great live band. 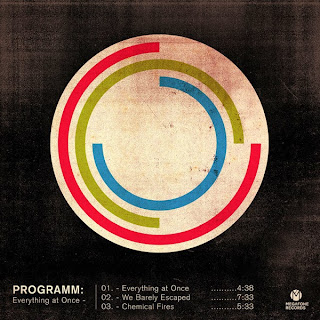 Today I went back to Bandcamp and bought their 3-song EP. It was pay what you want, and I gave them $3. Won't make them rich, but better than 3 cents.
Posted by Ryan Bigge at 3:24 PM

Without a bit of prior experience, a great suggestion isn't that great

Before Tom Scocca crapped all over it, I read Adam Mordecai’s Quora post about why they write 25 headlines at Upworthy. I’ve included the entire passage further down, but the most relevant bit is this:

The reason it’s always 25, no less, is that it forces you to think waaaay outside the box when writing. You get desperate around headline 21, and do something so out of left field that it’s not the typical headline.

I found myself immediately agreeing with this, because I have experienced something similar. Maybe not 25 headlines, but there have been a couple of times over the past year where I’ve written at least 10. And even at that point I found myself forced to think beyond the obvious.

The problem is that 85% of people who read Adam’s post will a) think it’s a good idea but b) never bother to try it. A good suggestion requires a modest amount of personal experience for it to be meaningful. And I’m willing to bet that most people reading his post have never had to write more than a handful of headlines.

Adam goes on to note that he can write 25 headlines in 15 minutes, now that he’s practiced enough. That’s the other barrier to adoption – if you’ve never written 10 headlines, then writing 25 is probably going to be a near impossible task. I’m not saying that good advice is impossible to transmit to those without any prior experience in the topic area, but it does make it more difficult. It’s worth keeping in mind the next time you sling around one of those LinkedIn productivity listicles. Inbox Zero zealots are born from people who once had 2,649 unread emails.

The reason we write 25 headlines is that it’s an old strategy from my boss’s old gig, The Onion. At the Onion, they would “crap out 25 headlines” as fast as possible. Then in the pitch room, they’d assume that 20 were crap, and the remaining 5 had an opportunity to be an article. Then once they had their headline, they’d finish their piece.
The reason it’s always 25, no less, is that it forces you to think waaaay outside the box when writing. You get desperate around headline 21, and do something so out of left field that it’s not the typical headline. The key is to not overthink your headlines and make every sentence perfect. Remember 20 will be crap. So just get them all out.

Yesterday I released some short story ideas into the wild. Today I've got a few sentences to share:

In daylight, under the neon, everything felt different.

Of the seven men I’ve invited back to this apartment, these three I most regret.

She was a good or bad witch, depending on the angle.

A creative class couple in their mid-thirties. No longer pretty, not yet ugly.

The information was on my desk, going stale with each passing minute.

I glance at my watch. It says I’m thirty-two years old.

A cut and paste zine fair full of adorable indie gals. Cute and paste.
Posted by Ryan Bigge at 4:23 PM

Eight beginnings in search of an ending

I did some digital house cleaning this week. Scoured through digital folders where I keep short story ideas. I found eight potentials that will never go beyond the title and the first few paragraphs. Rather than keep them hidden, I thought I’d share.

Little Stories
A small ad in the classifieds:

Mail me a sheet of clean white paper, with any one word typewritten in the centre. Include $5. I will send you a story within a week.

Dozens of people followed these instructions. None were disappointed.

Book Club
The room has plain white walls. No windows. We occupy five chairs, arranged in a circle. Our moderator wears a black tie.

“Today we will orchestrate dialogue in a counter-clockwise direction,” he says.

“The rules have been previously explained,” he says. “Now let us begin.”

We provide daubs of ointment for abrasions of the soul.

Joy
I eventually learned she had dabbed Sunlight dish liquid behind her ears, just before our first date.

"You smell good," I said, when I was close enough to make an accurate assessment. I kissed her ear lobe. "It's like no perfume I'm familiar with. You smell --"

I stopped for a moment and looked at Joy. "Yeah."

She was anything but her namesake.

Until You Can Turn No Further
The rain became larger.

“The drops are so big,” she said. “They’re like little fish.”

Silvery water fish danced outside her window. She stuck out her hand and caught one. But it turned soft, a puddle in her palm where once was a rainfish.

Destroying Green Towers
The notice slid beneath my apartment door on a Thursday evening. It was straightforward, except for this:

Tenants are the true energy of any building. Yet when a building is sick and in need of replacement, we abandon it. Rather than letting strangers with no emotional attachment to this place destroy our building, I think there is a better way.

“That kook wants us to tear down our own damn apartments,” Kelly said in the hallway, two days later.

The notice promised it would be a celebration. A chance to release old ghosts and terrible arguments trapped behind walls. A final visit with our memories, good and ill.

A meeting was inevitable. The landlord was offering a six-month notice of demolition and a relocation offer for all residents. Still, no one was happy.

A Number of Birds
Five thousand blackbirds, unable to fly, drop toward the ground.

Blackbirds against blacktop. Atop white roofs. Into blue ocean.

The loss of flight, a sudden inability to flap wings, this loss of birdness, worse than death.

The blackbirds bruise the city in every possible location.

Crimmy Hex to the rescue

So last night I was sitting in a classroom, learning more about social media listening tools, and discovered that there’s a company called Crimson Hexagon. I had no idea. How awesome is that name?

Say it out loud: Crimson Hexagon

Genius. So I grabbed my phone and did this:


A few minutes later, I was retweeted by Hexagonbot. That was fun.

But then this morning, this happened:


Crimmy Hex for the win. I guess it shouldn't be a complete surprise that a company that deals with social media is adept at social media. But still, well played. Crimmy Hex might just defeat the supervillians known as Sysomos and Radian6.